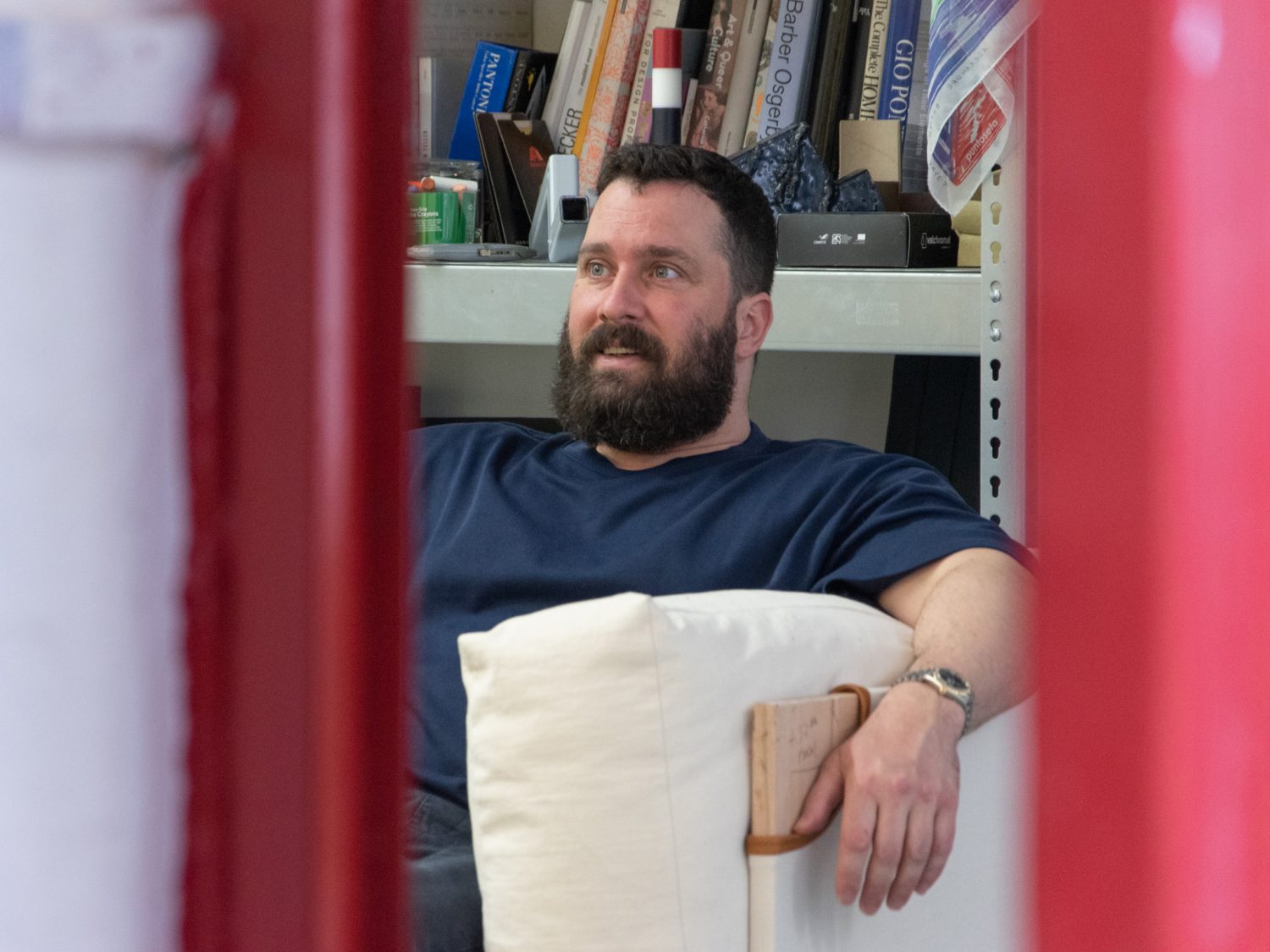 Philippe Malouin tries out the Camp armchair prototype at his Hackney studio, April 2022.

On the eve of the SCP 2022 Collection launch at the Milan Salone, featuring the new Camp armchair by Philippe Malouin, SCP's Editor Duncan Riches went to his Hackney studio to talk.

It’s a bright April day and Philippe Malouin, in very fetching slippers, welcomes us into his Hackney studio. It’s situated a little east of Mare Street, in an old industrial building that has been converted into studios for artists and creatives. Philippe seems very at ease here, the space is beautiful, a blend of arresting objects, a workshop area, some desking and a neat little kitchenette off to one side. 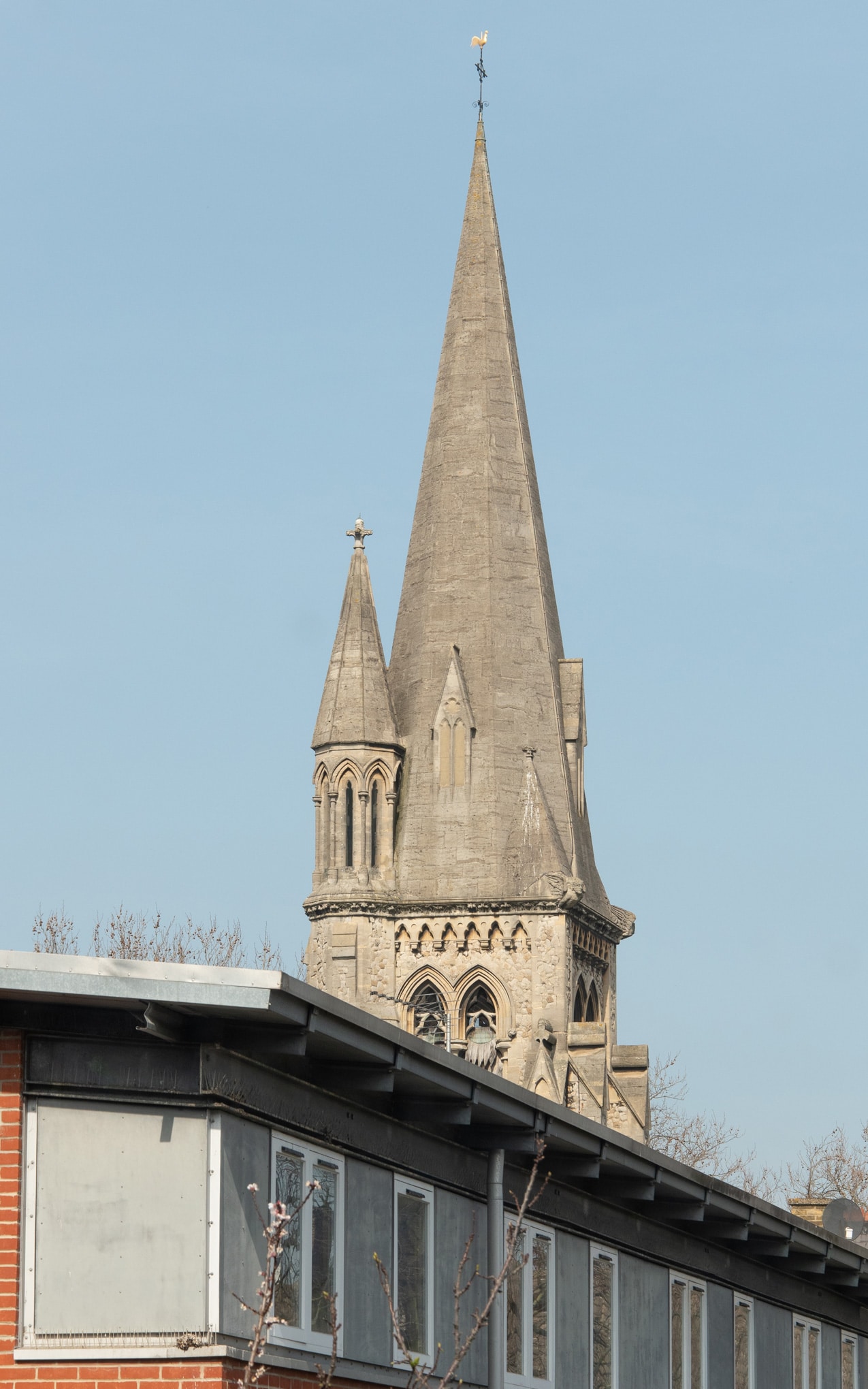 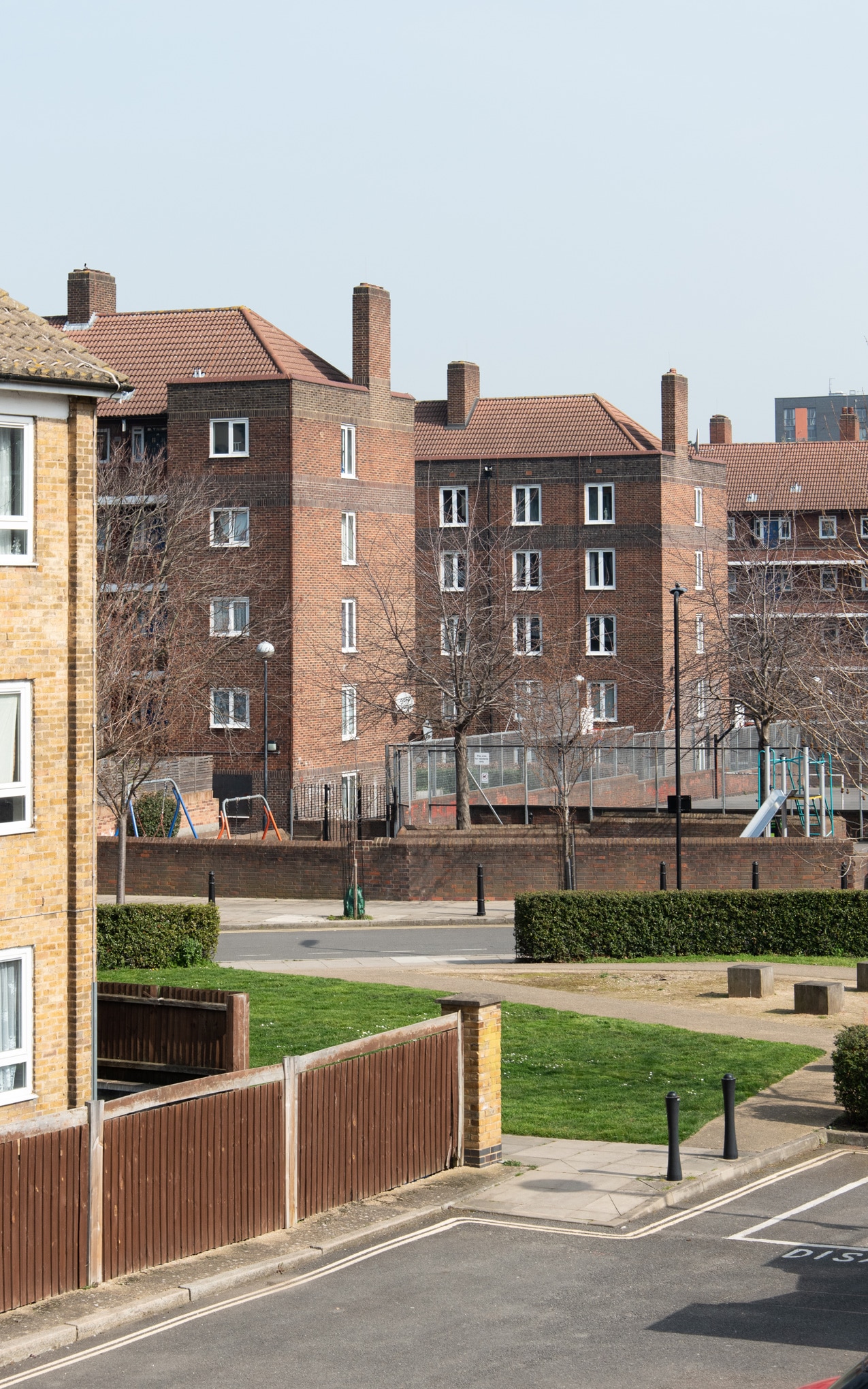 View from Philippe Malouin's studio, which overlooks one of the Borough's post-war housing estates, built by the GLC.

How did you find the studio?

“I’ve been here for almost ten years. I remember just searching for studios in Hackney and came across the building. Two years ago this space became available, and I jumped on it. I redid it completely, I just knew I was going to stay here for a long time. Now for me it’s the dream studio. I can have clean, I can have dirty, and having the separate kitchen allows you to have meetings there, eat, be social. It’s the nicest studio I have had in London.” 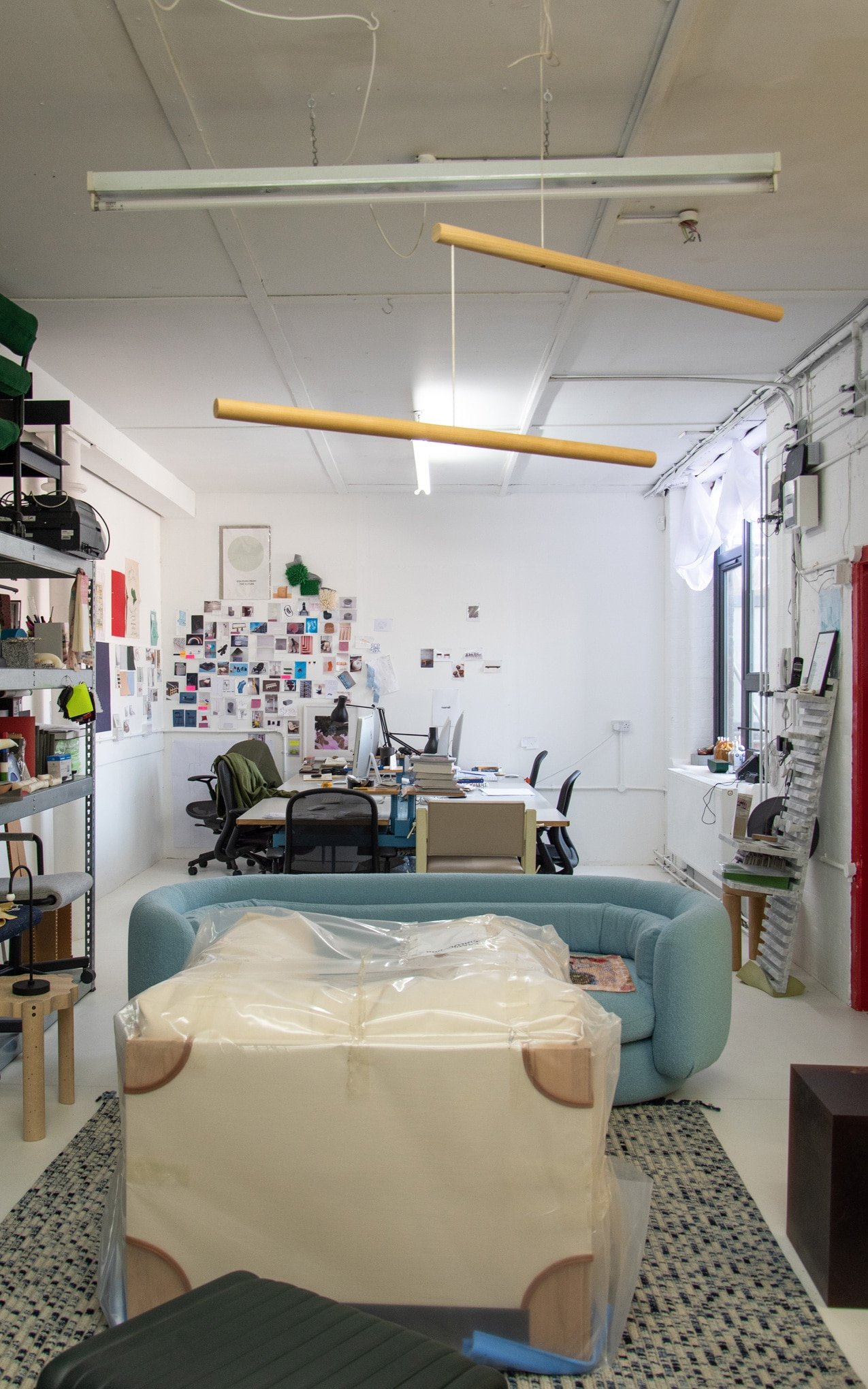 Camp armchair prototype, ready for unwrapping at the studio. 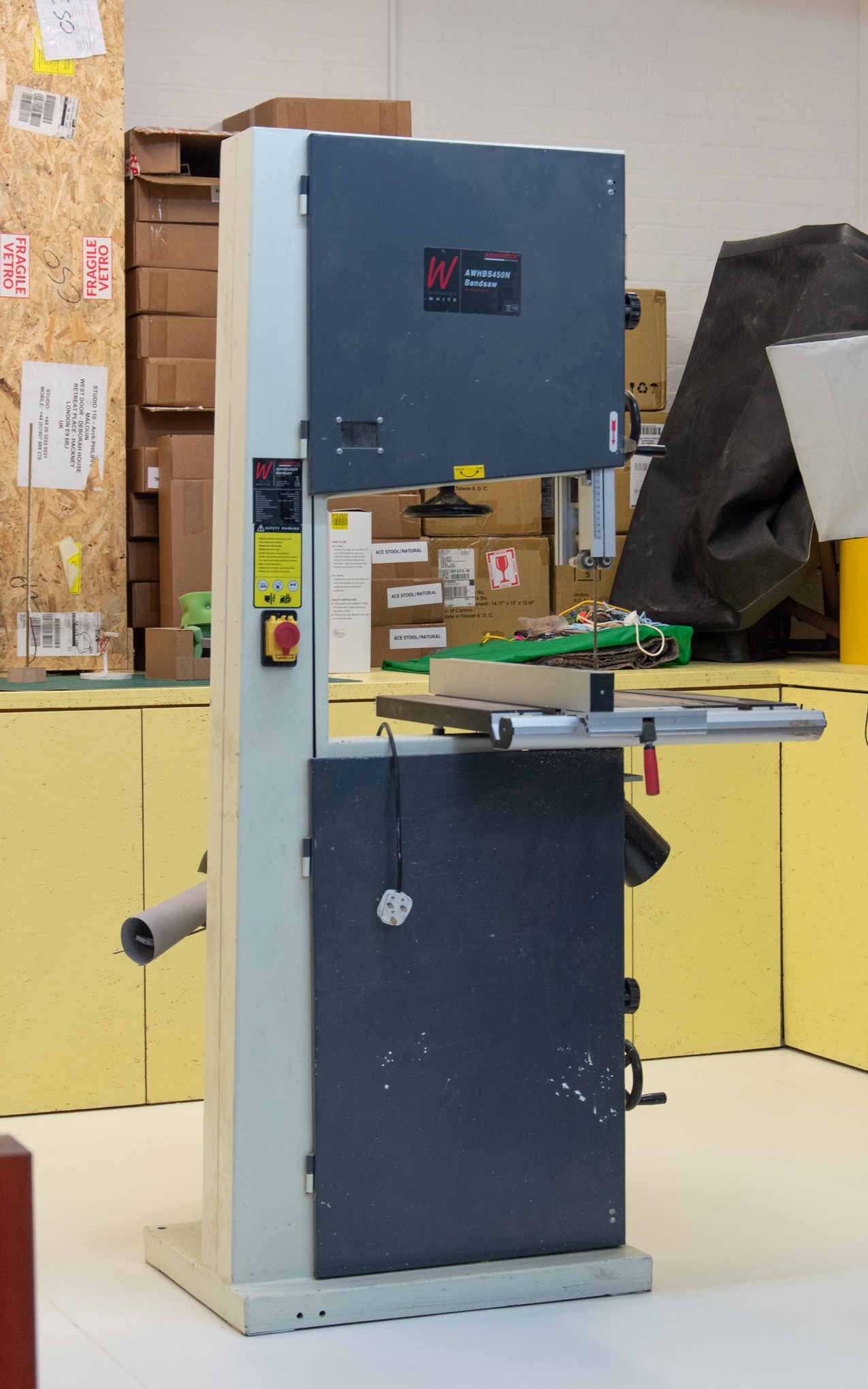 "Now for me it's the dream studio. I can have clean, I can have dirty, and having the separate kitchen allows you to have meetings there, eat, be social. It's the nicest studio I have had in London." 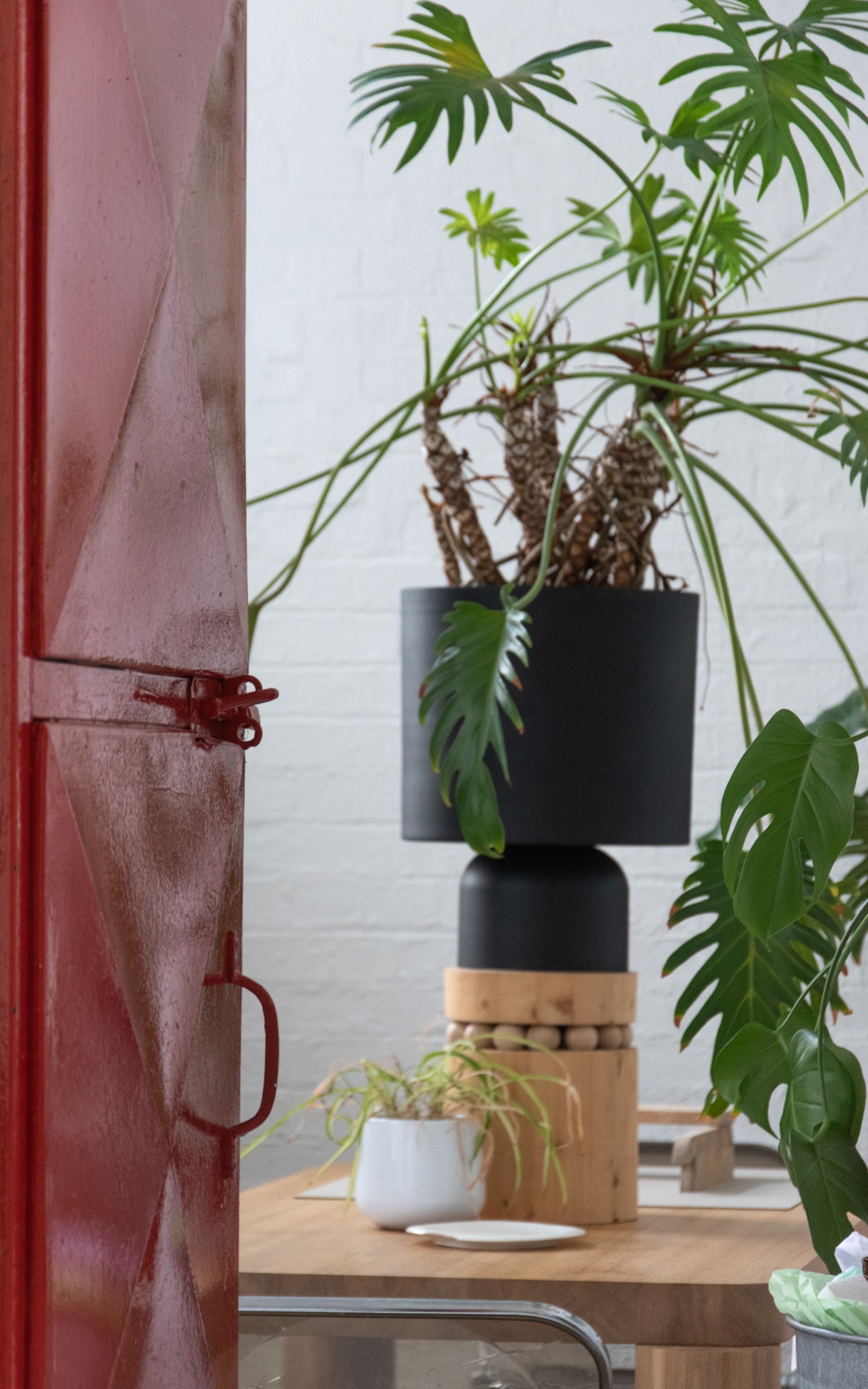 View into the kitchen. 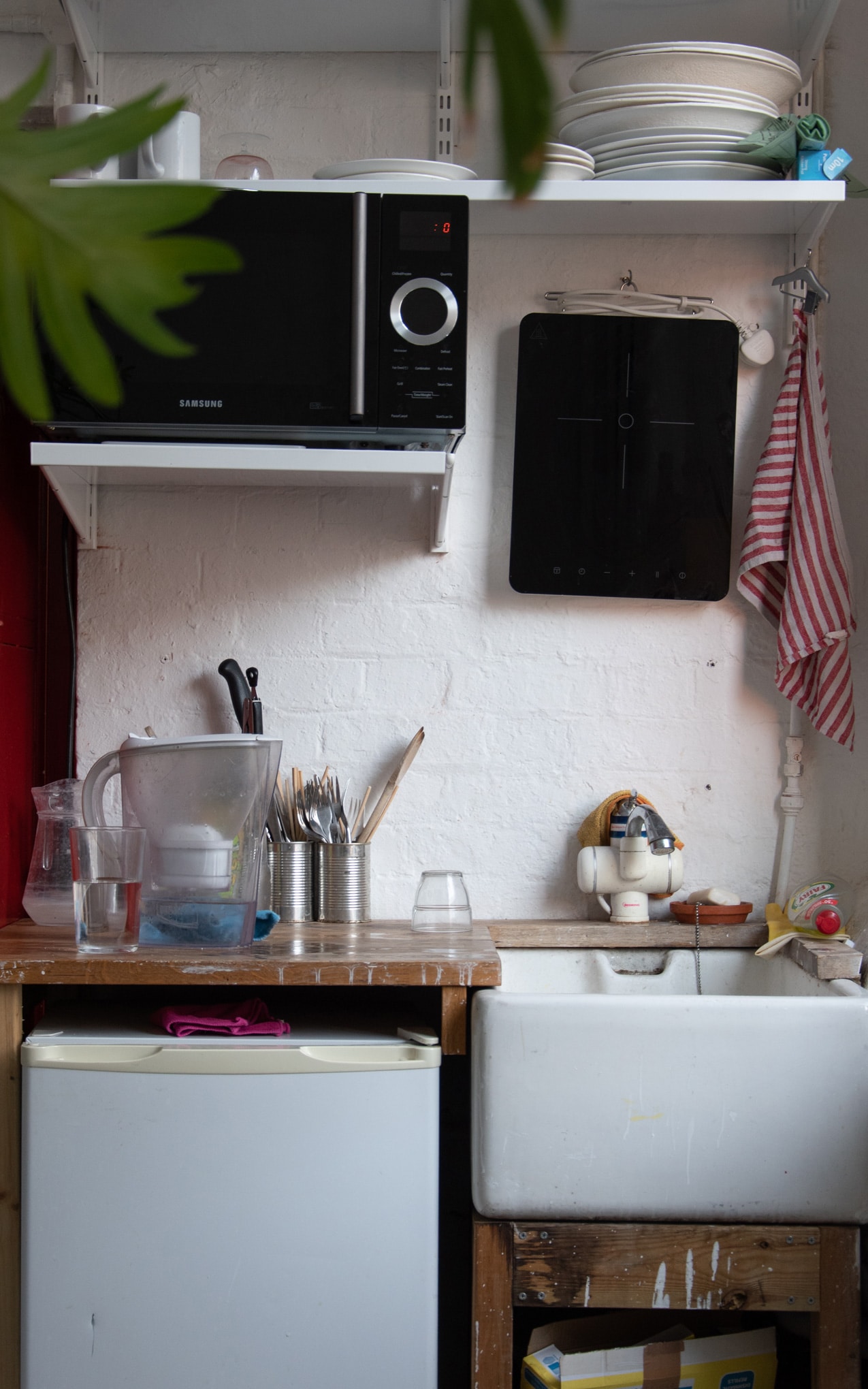 What’s an ideal day in the studio?

“I come in late. Usually Stefan is here, Julian has recently moved to Athens, so he works from there. I come in the afternoons and I work late. I like waking up whenever I wake up, and not hurrying. Then go to the gym. Coming in here, every day is different. Sometimes it’s admin all day, sometimes admin all week. Sometimes it is me making things for a whole week, it just depends on what is happening.” 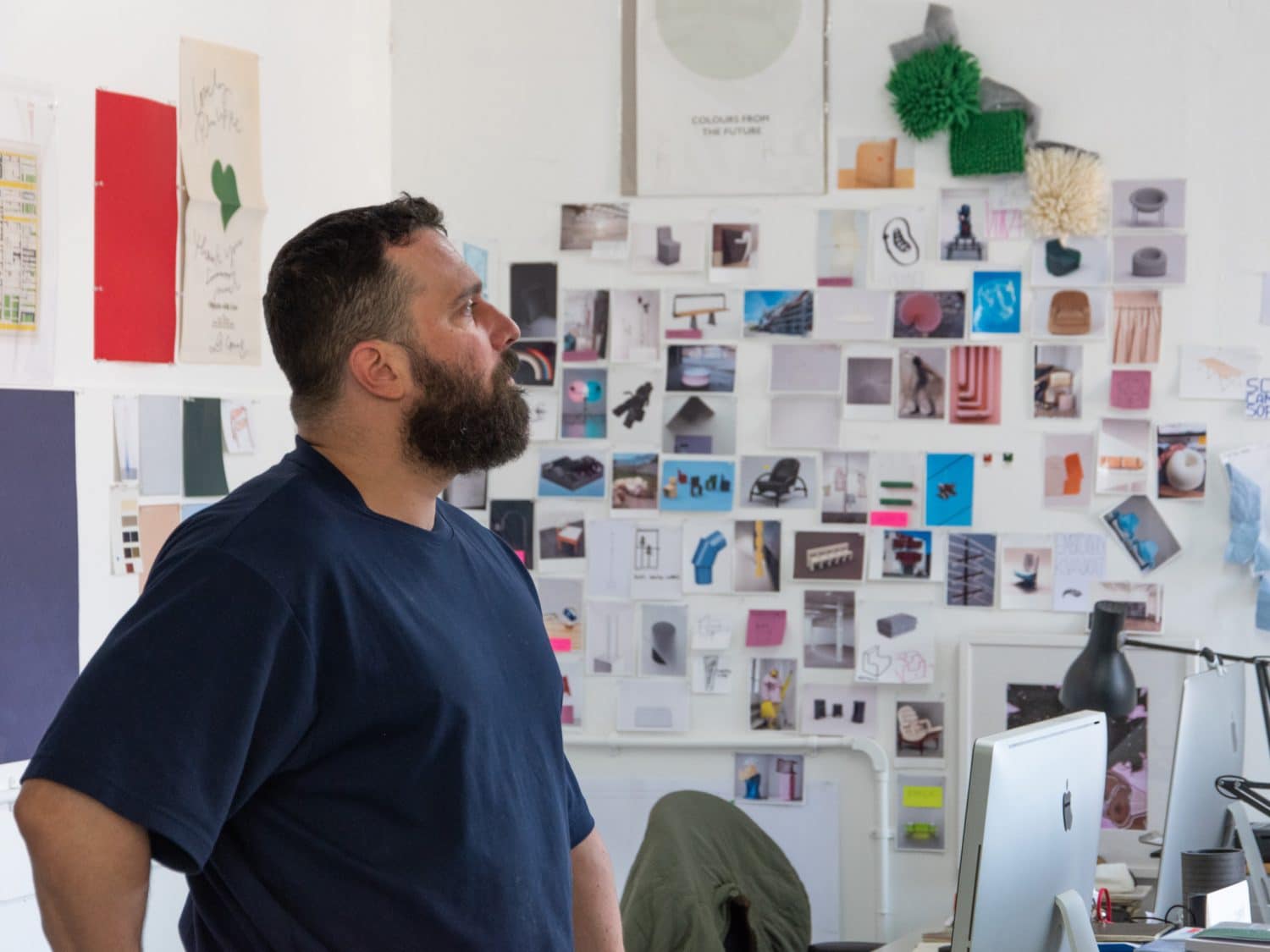 “I am not the best manager of time, but we always have four to five projects on at one time. So, it’s always a lot of work to get it all going. I think I am really lucky in that I only do furniture, I don’t do anything else. For that, I am probably the most thankful in the world. As of two years ago I am able to make a living off just furniture sales. In my generation that is hard.” 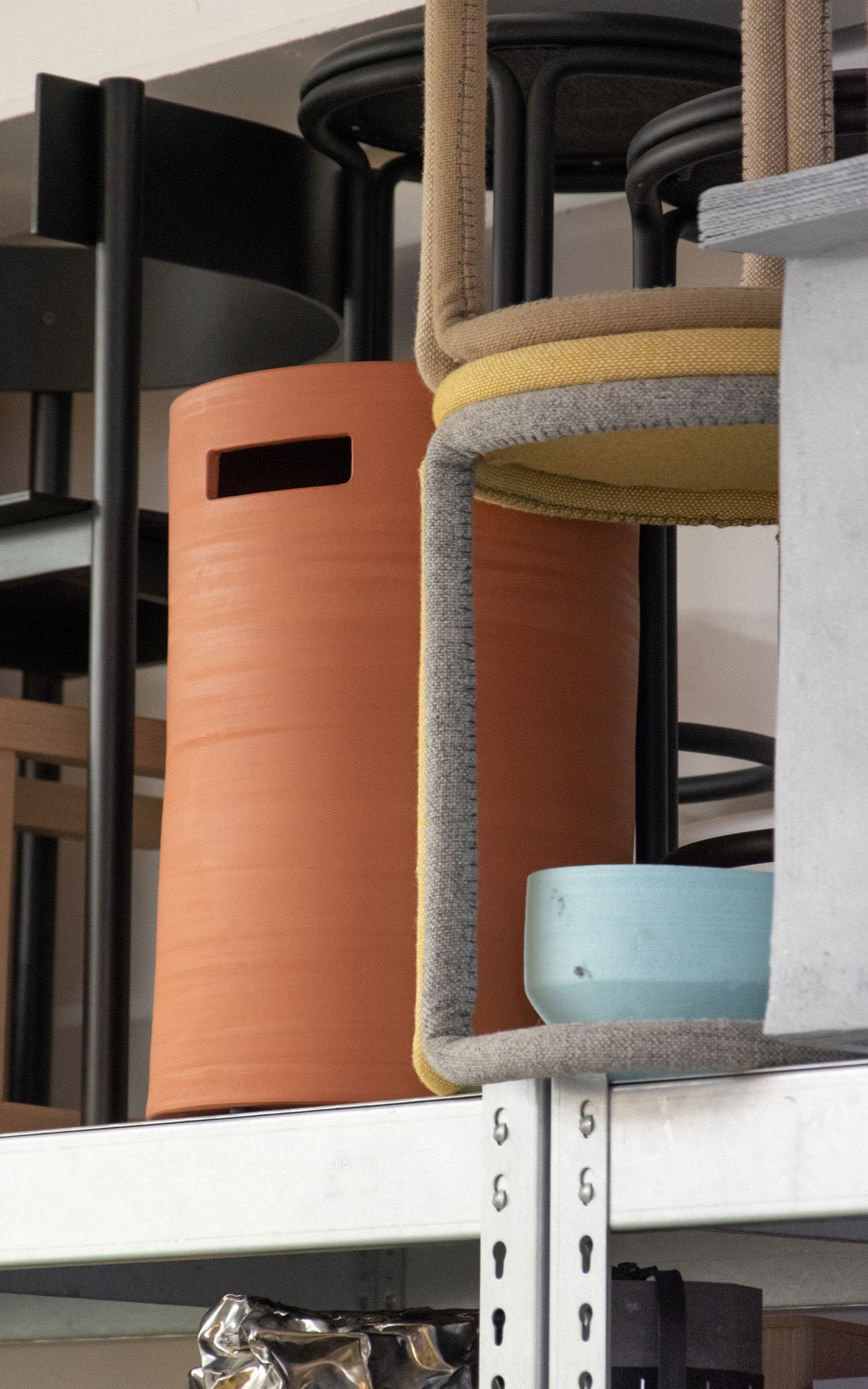 A Lift stool for SCP, amongst other designs on Philippe's studio shelves. 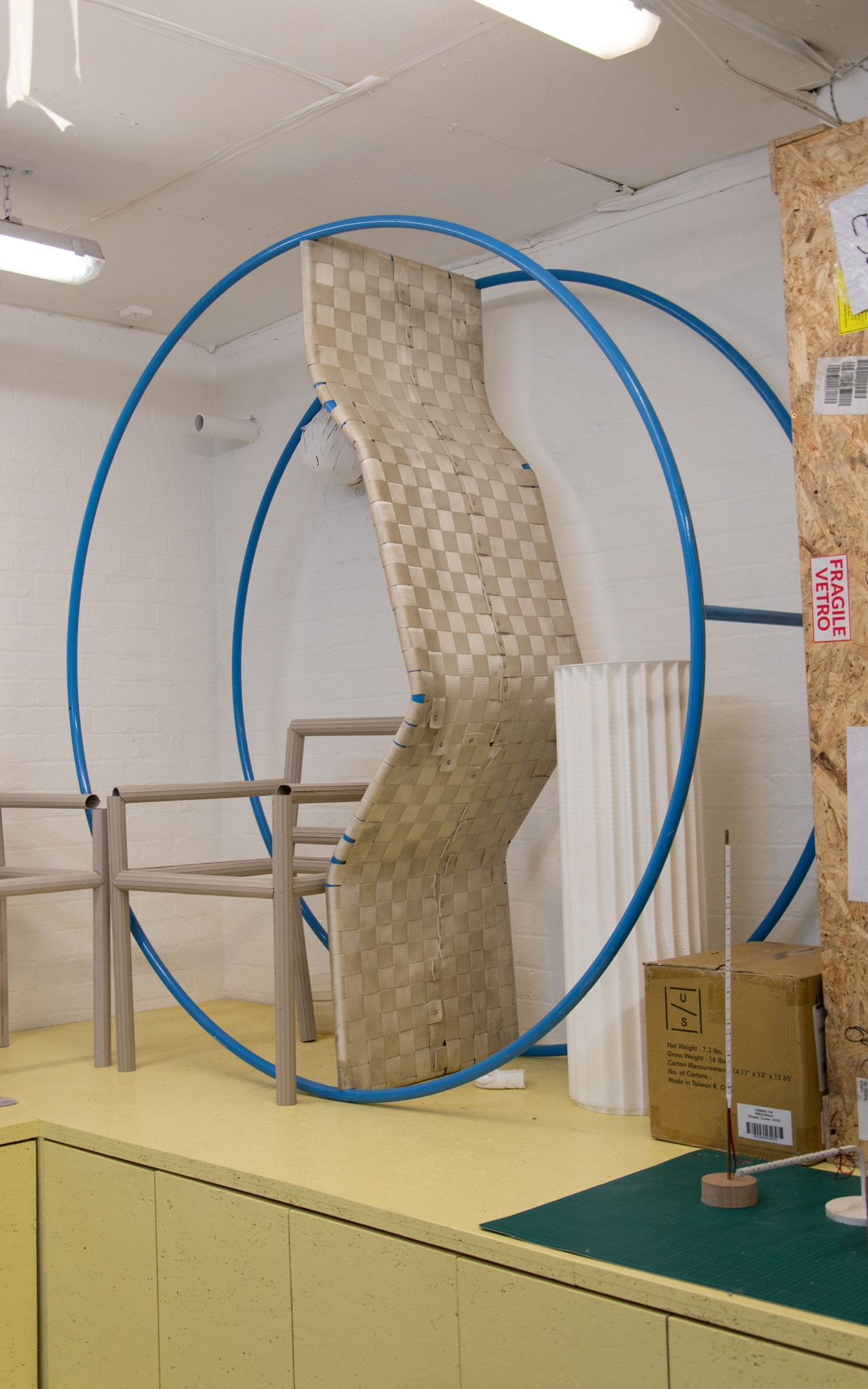 A chair prototype in the workshop area.

"I think I am really lucky in that I only do furniture, I don't do anything else. For that, I am probably the most thankful in the world."

Was that focus on just furniture intentional?

“It’s just worked that way. Furniture has always been what I wanted to do from the very beginning. I do lighting as well. We have worked with technology companies, but those things just never came out. We just do furniture and lighting really. Now we are lucky because we have clients that we are really comfortable working with, and we have big clients, which is nice for us. We used to have to do interiors and other things, special projects and advising, which I had a big team for. There were a million jobs to do. Now, with it just being furniture and lighting, I am so glad because everything else was not to my liking. To get to that point is really hard. To have enough products to give you enough royalties is hard. I mean the royalty model is a bit outdated, and the fact that they teach kids in University that it is a viable way to make a living, is silly. It’s a very small percentage that get to do that. People can’t generally make money from it. It’s like having to have a hit record on the radio.” 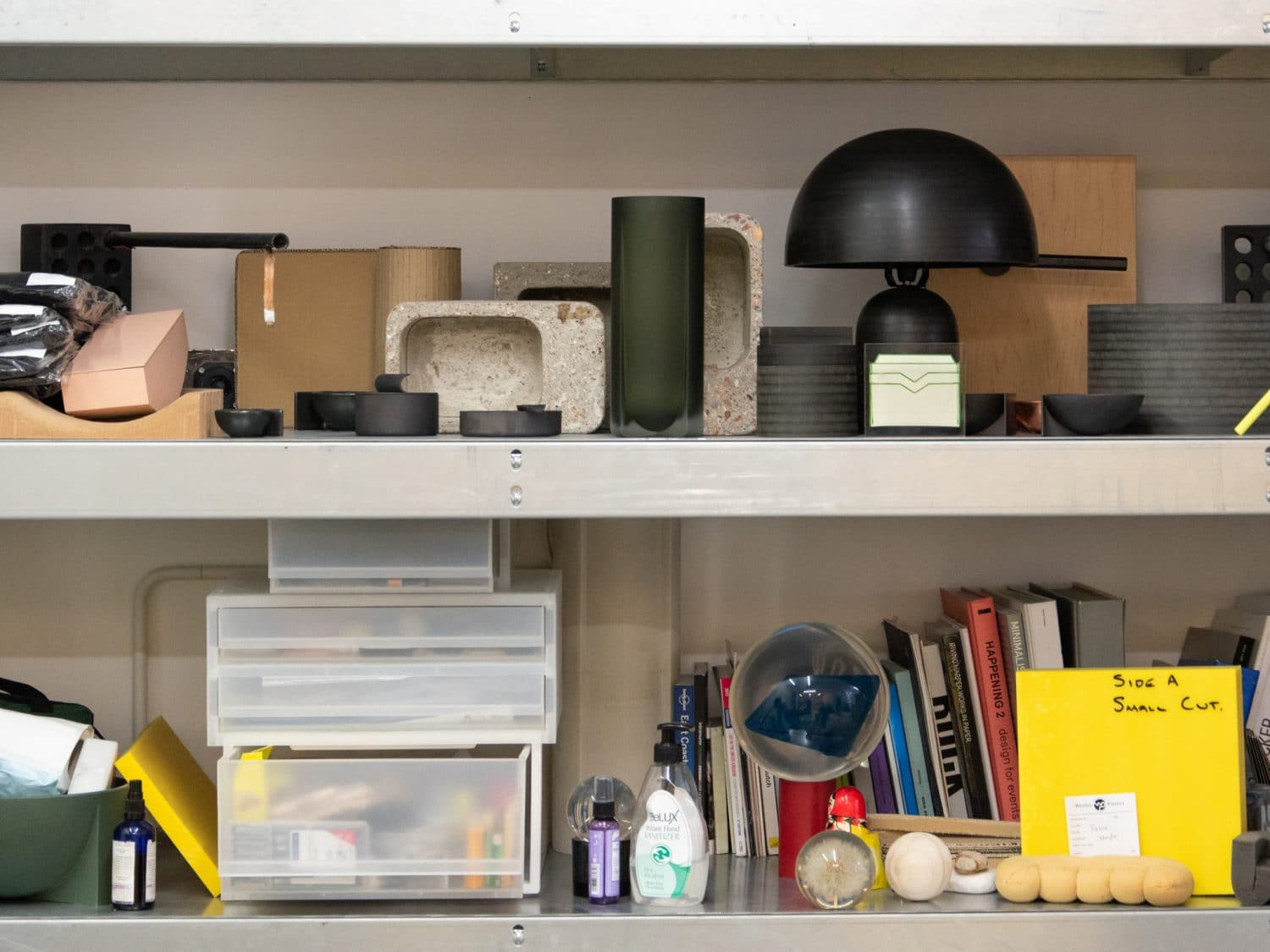 Shelves at the studio.

The studio visit coincides with the arrival of the first prototype of Philippe’s new Camp armchair for SCP, so we unwrapped it for a first look.

What was Sheridan’s brief for the chair?

“Sheridan wanted a natural, comfortable armchair that had a simple construction. He was also interested in having the frame made on site at the factory in Norfolk, so we designed the frame to be simple. It does have stylistic references to 1940s and 1950s military camp gear. It’s just so incredibly simple, nothing is attached, so if you ever wanted to change the jacket you could, if you wanted to have it dry-cleaned, you could. All of the cushions covers are zip up ones, so can be removed.” 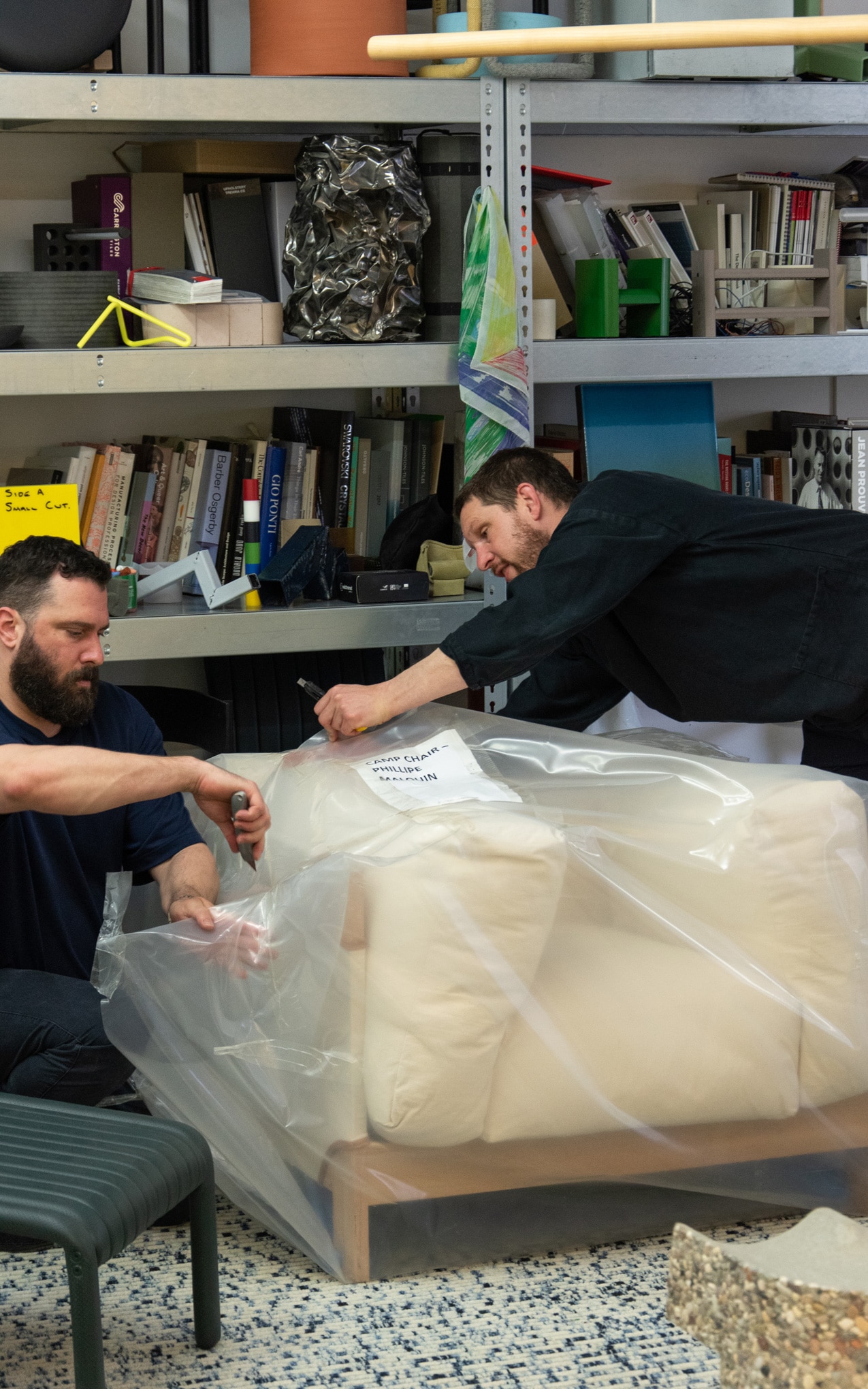 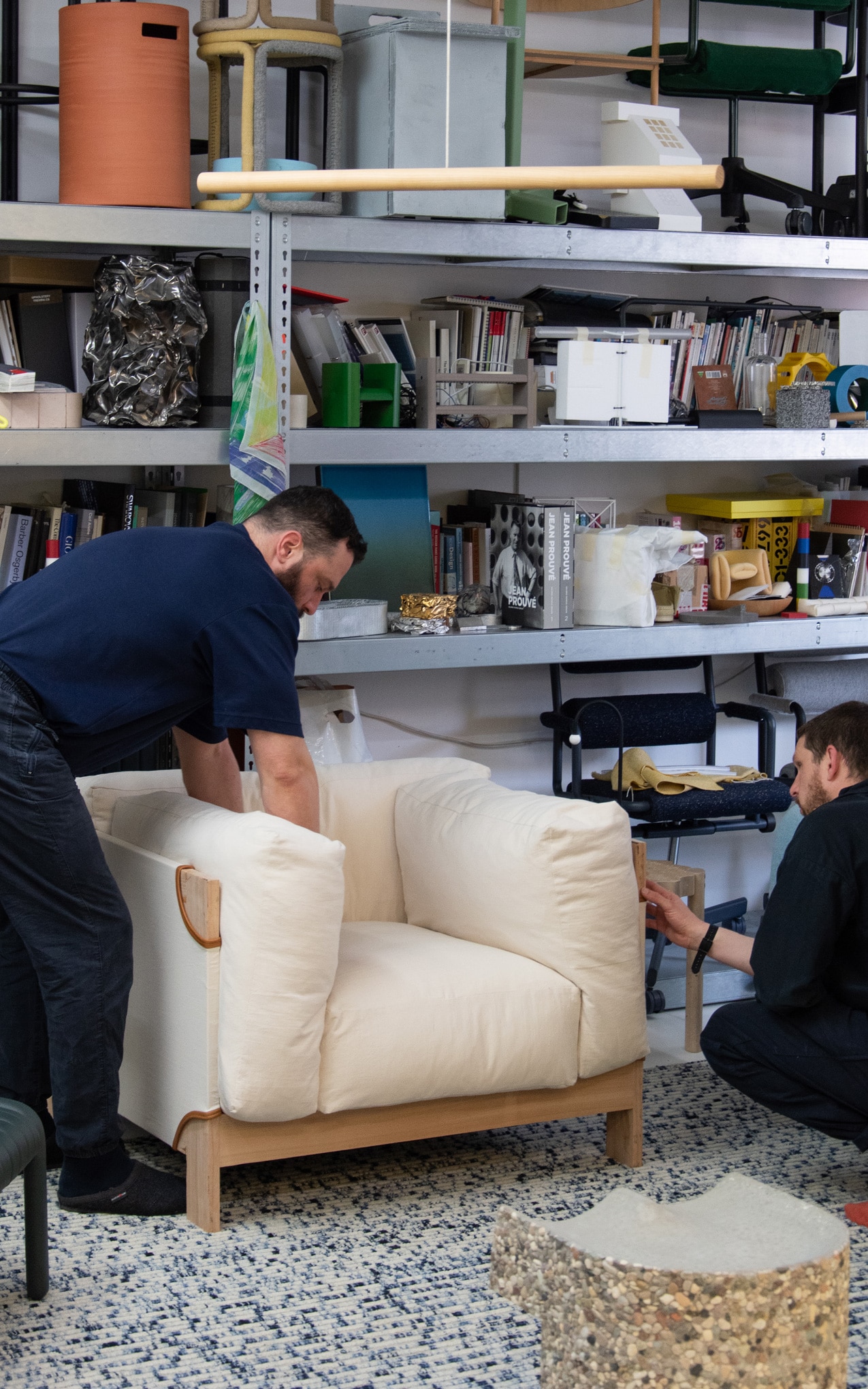 How did you develop it?

“It was a drawing first, then we gave technical drawings to the factory, then we did three trips up there. We are very comfortable now working with Tim and the team there, he knows exactly what I am talking about when we work. It’s also because SCP is in the UK, it allows me to be there every step of the way. It’s makes a difference to be there personally.” 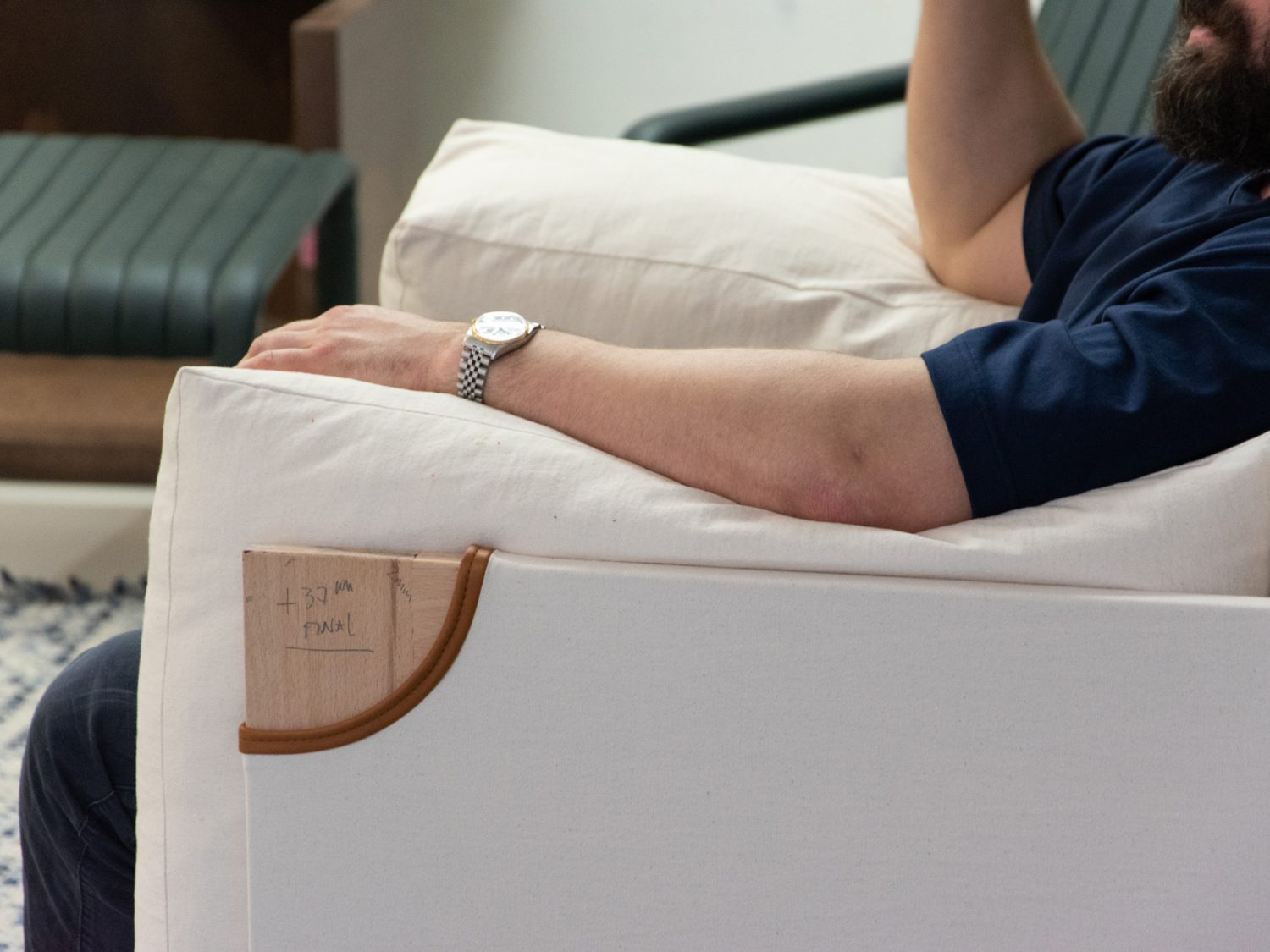 "As SCP is in the UK, it allows me to be there every step of the way. It's makes a difference to be there personally."

How long did it take to develop?

“I’ve got to say it was a lot simpler than a lot of stuff we have done for SCP. This was a lot quicker. The Group took tons of development, so did the Puffer. Whereas I knew this was going to work, it doesn’t have compound shapes, its cushions hold themselves up, the frame is so simple. That’s why we used vertical timber, instead of a peg, so that we could make a sofa out of the design, it wouldn’t need reinforcement. Everything was decided so that we could make a simple, super comfortable chair that could become a sofa collection as well. “

Is there a certain user in mind?

“I didn’t really think of the specific user or age group, more just tried to design something that was cosy and comfortable. It’s more sober than some of the stuff I have done, so will perhaps sit in more places. But then again, we thought the Group was crazy when we launched it, and now it’s everywhere. This does have nostalgic style references. It isn’t too fancy, it’s the kind of thing that you can scuff up a bit and it will still look good. It could work for Contract as well, in reception areas, or in mixed environments.” 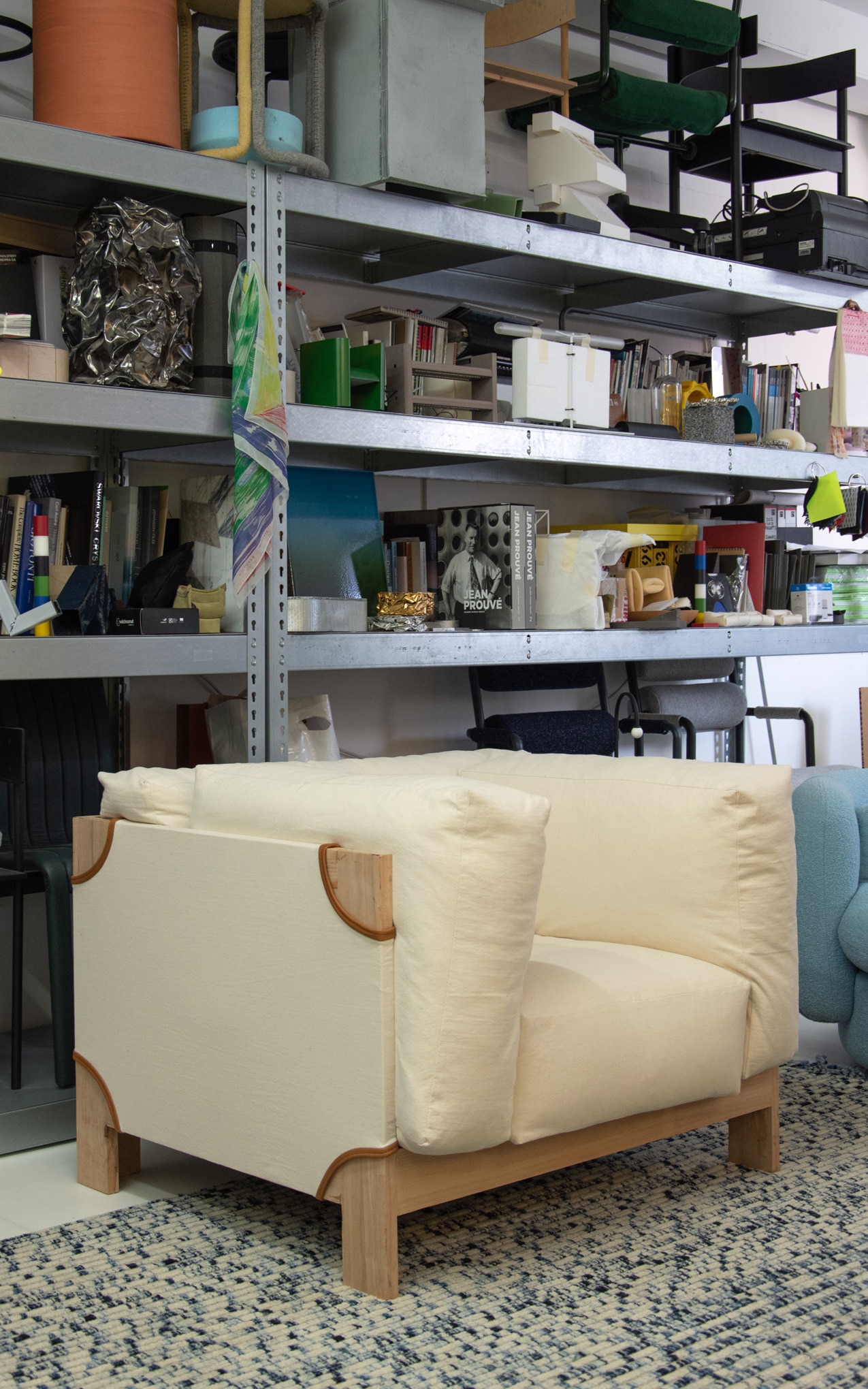 The Camp armchair is simply constructed for easy of manufacture and use. 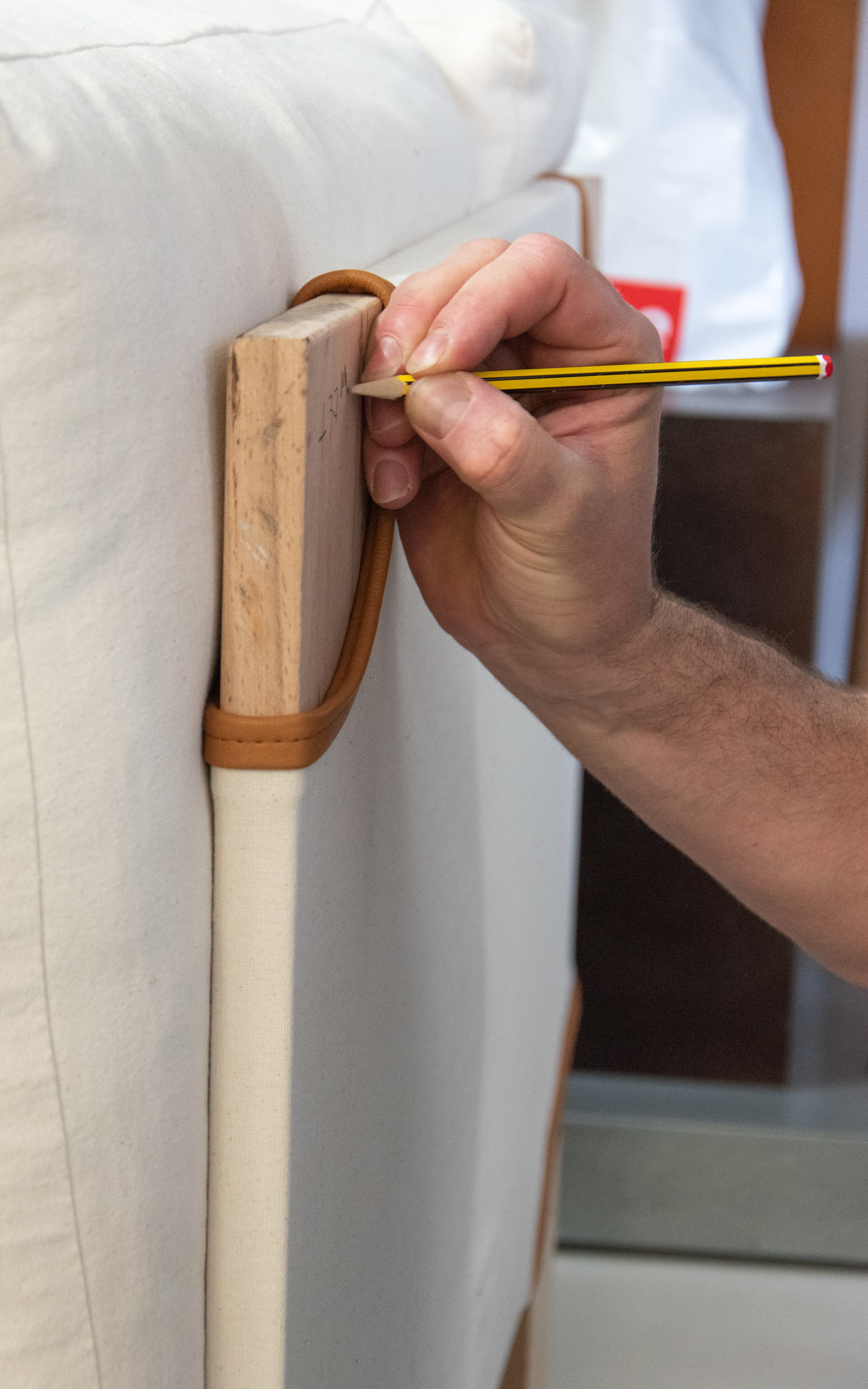 Philippe makes notes on the prototype for suggested changes.

Are there particular fabrics that you would suggest for the piece?

“Canvas, cotton-based canvas. The essence of where it comes from, that kind of military based camp bed, or that backpack. They are made in leather for the trimmings and canvas for the rest. People can order whatever they want, but I think it would be a shame to not go with that hard-wearing cotton. This is calico, so it is a little bit softer, it also comes in a ton of colours, which is nice. The textiles are made here in the UK too, so that it is all made in the UK.” 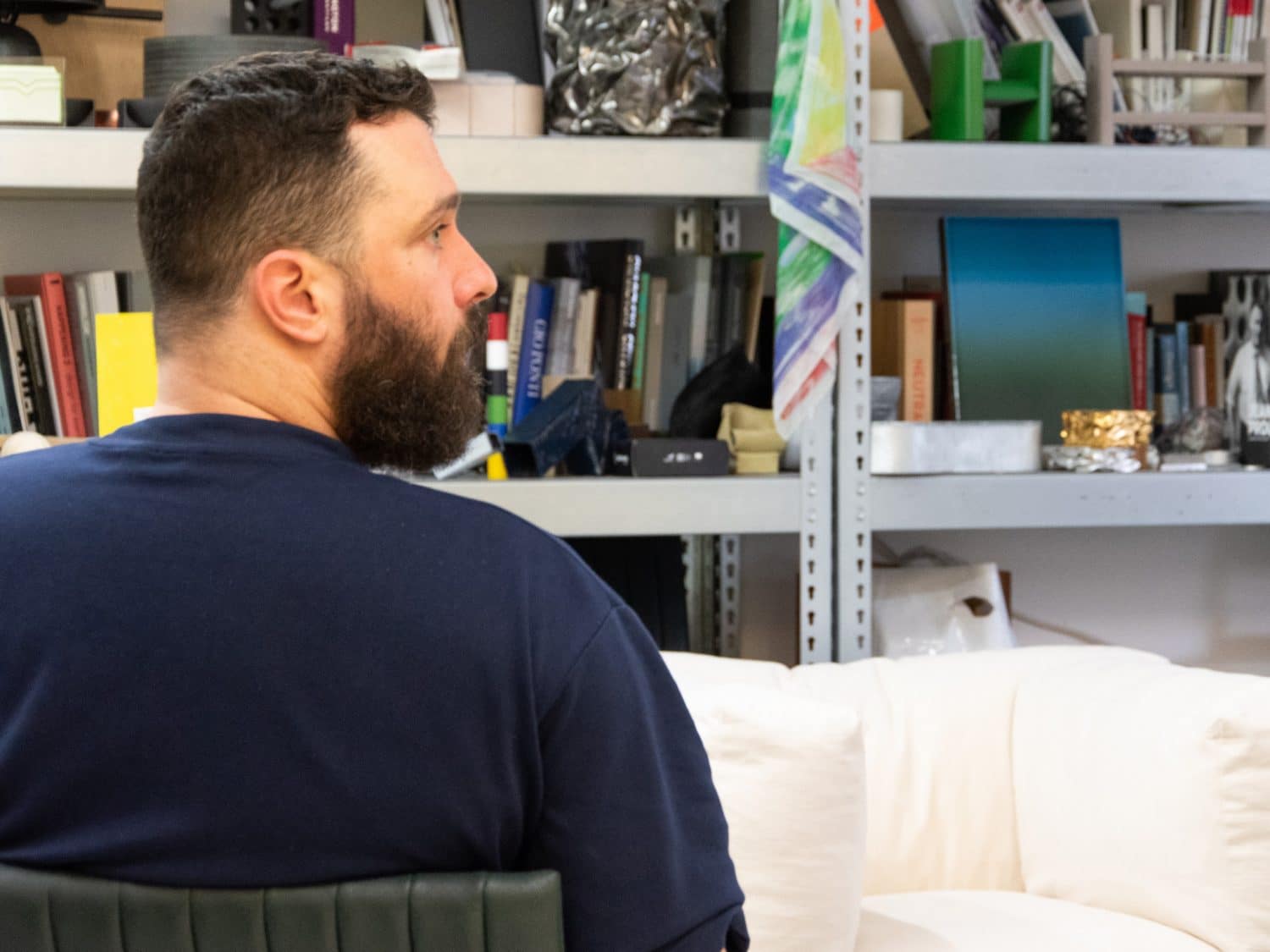 A big thank you to Philippe Malouin for welcoming us to his studio. 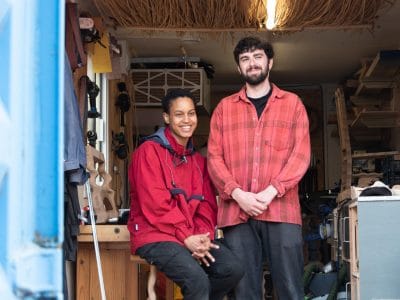 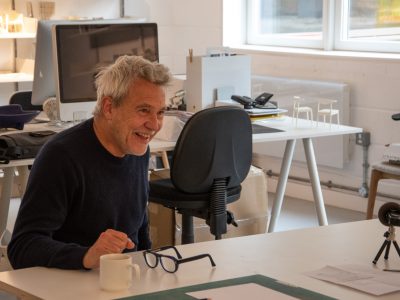