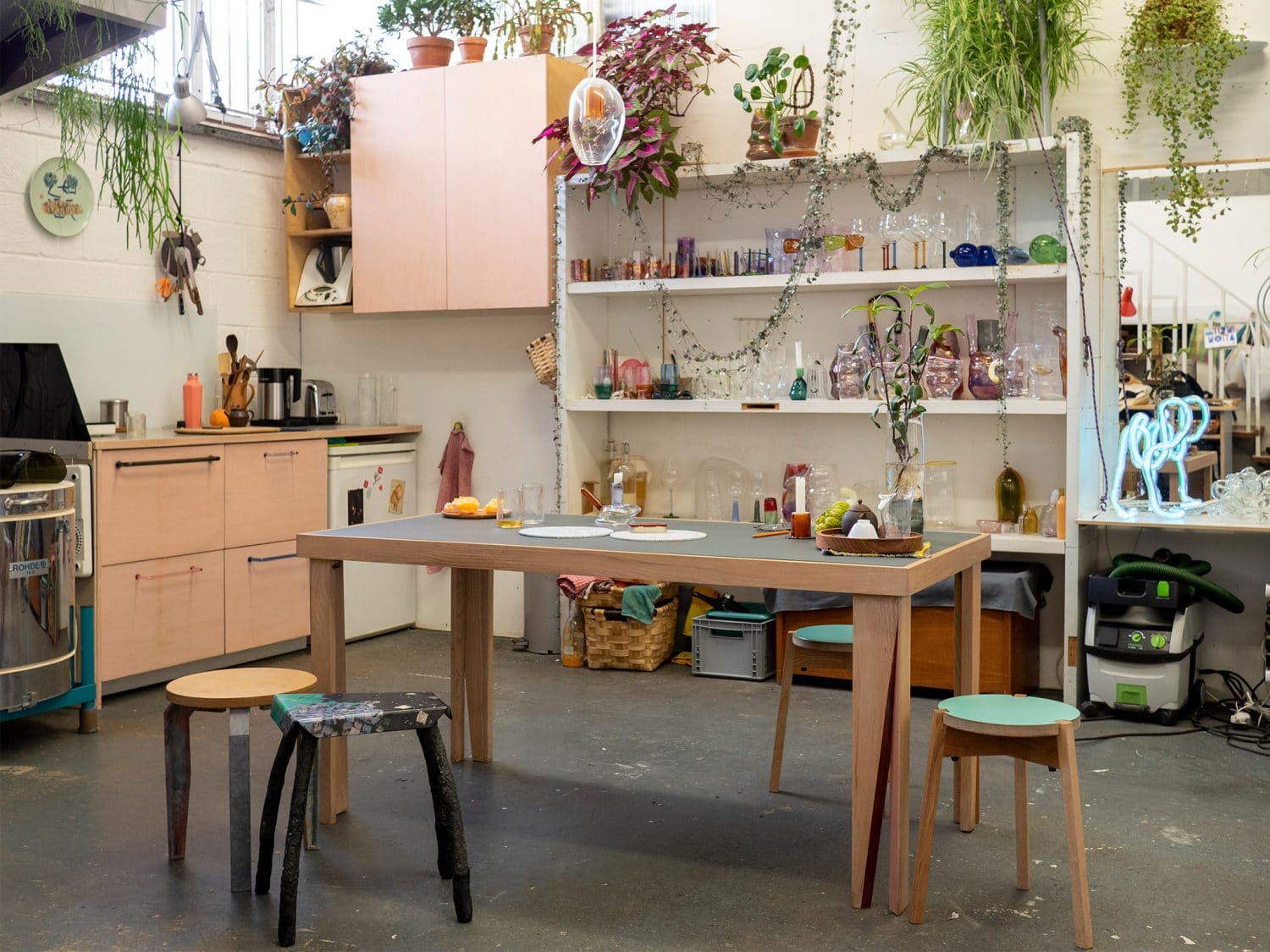 At SCP, we present an exclusive view into the workshop of glass designer Jochen Holz. Holz transforms prefabricated glass tubes into one-off glassware pieces using the lampworking technique. Glass is melted over a torch and gently blown, then shaped and fused together, creating a beautiful body of work that is both spontaneous and precise.

Holz was initially trained in the highly technical world of lampworking, which produces glass that is most commonly used for scientific applications. After studying at the RCA, Holz has developed a meditative working practice in East London, where improvisation and controlled experimentation lead his creative output. The work he creates is innately human, capturing in form a specific moment in time.

For LCW 2020, we have invited London-based glass designer Jochen Holz to present a collection of new work, including vessels, tableware and one-off objects.

Read the Q&A between our editor Duncan Riches and Jochen Holz below. 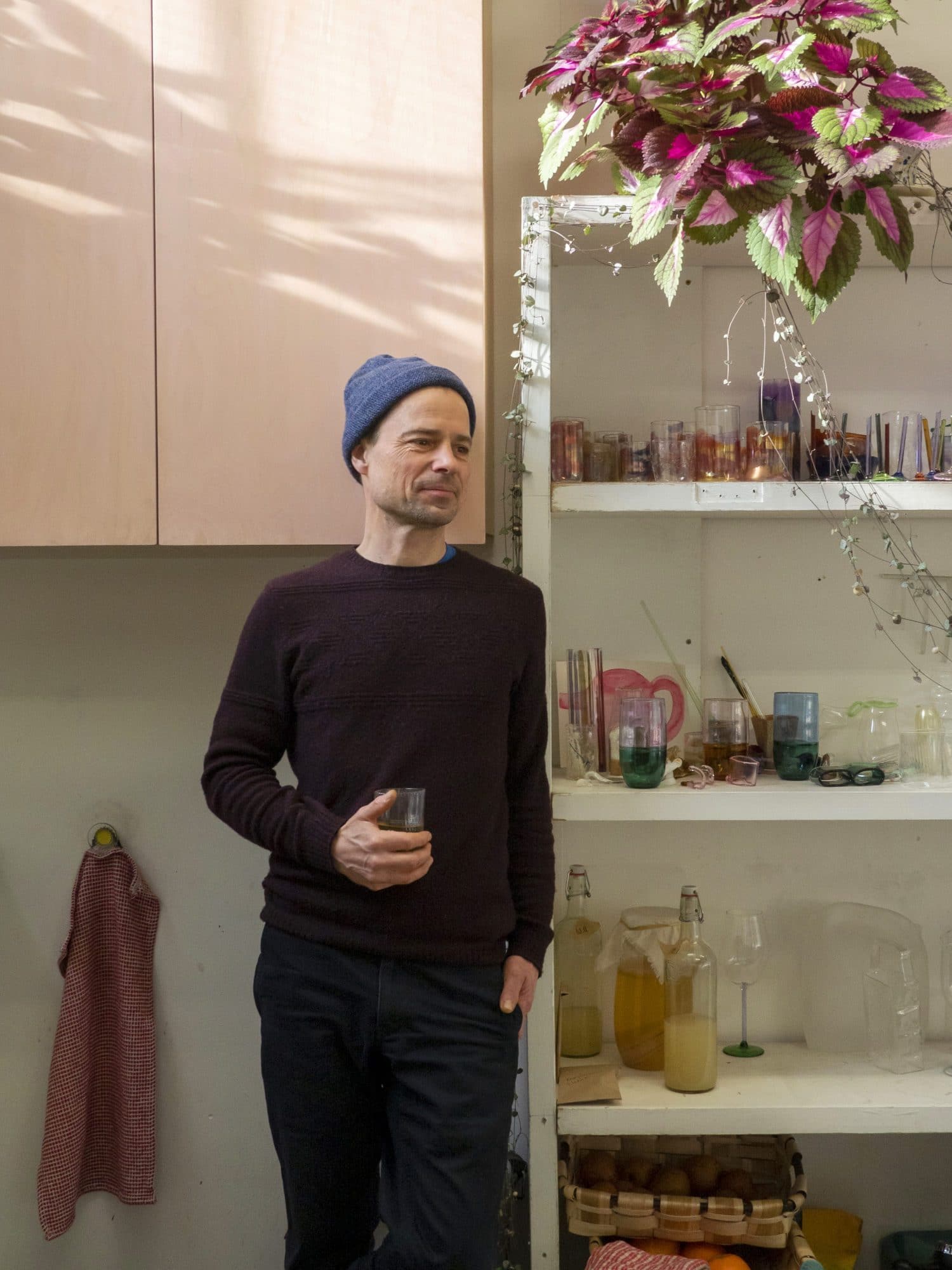 Starting at the beginning, I wanted to go back to when you were a child and how you became interested in the materiality of things and in creativity.

I always liked more practical things. My school career was quite bumpy, I grew up in a provincial area and there were a lot of physical things to do. My mum let me do things in my room, that nobody would get away with nowadays. I had this little camping cooker on the carpet, with a bucket of water next to it for safety. I would cook things and burn matchbox cars, and the room would be half-filled with smoke, but I could do things like that. I would also play outside with friends, always doing practical things, mucking about.

For the last four years of my education, I went to a Steiner school and that was a real saviour for me. Suddenly I could engage in everything again and not be depressed about my bad marks. I got into a positive relationship with school and learning. The emphasis in all Steiner schools is craft, theatre, farming, and gardening, but even by Steiner standards we had a lot of workshops, very obscure things like paper making, basket weaving, and leather courses. 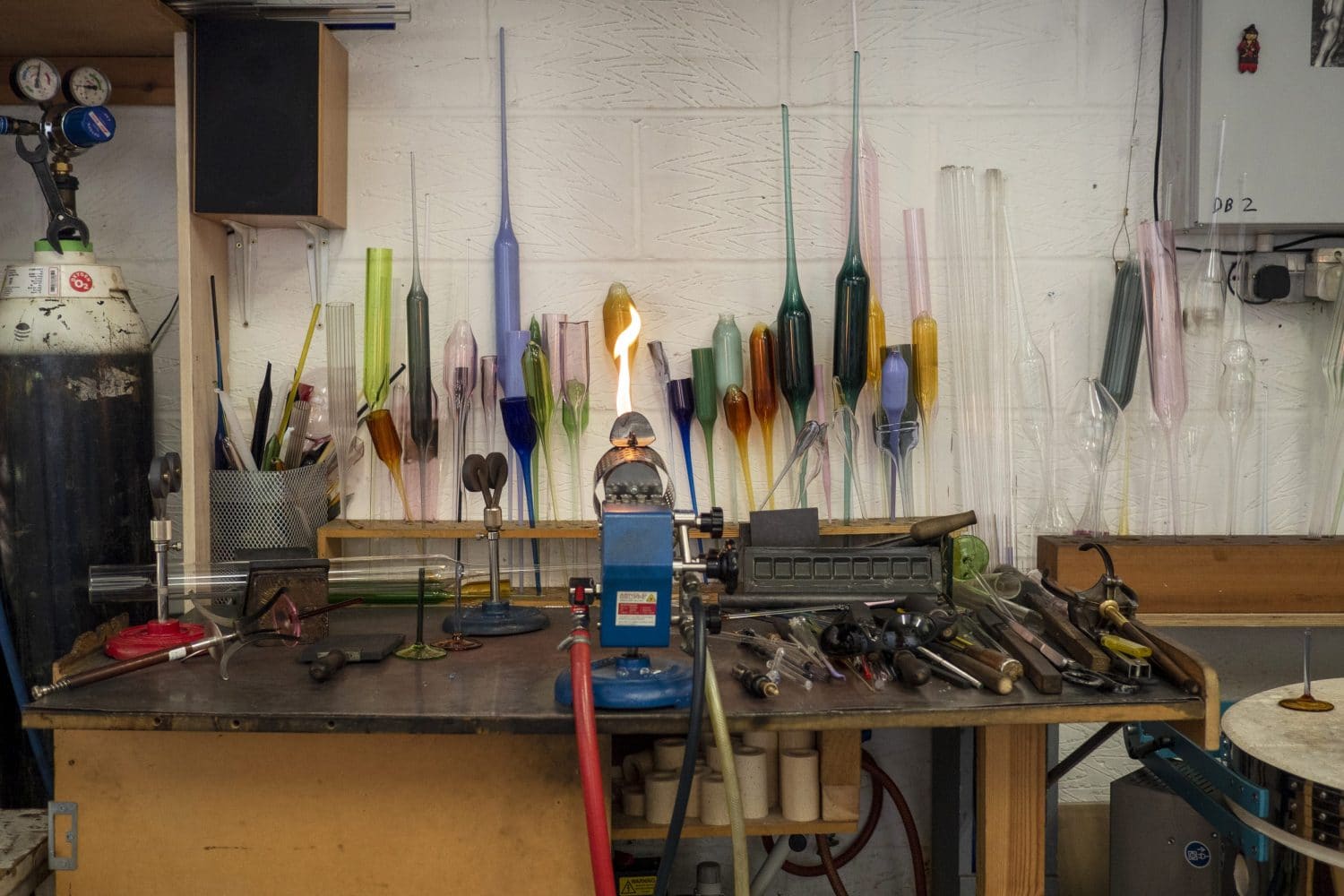 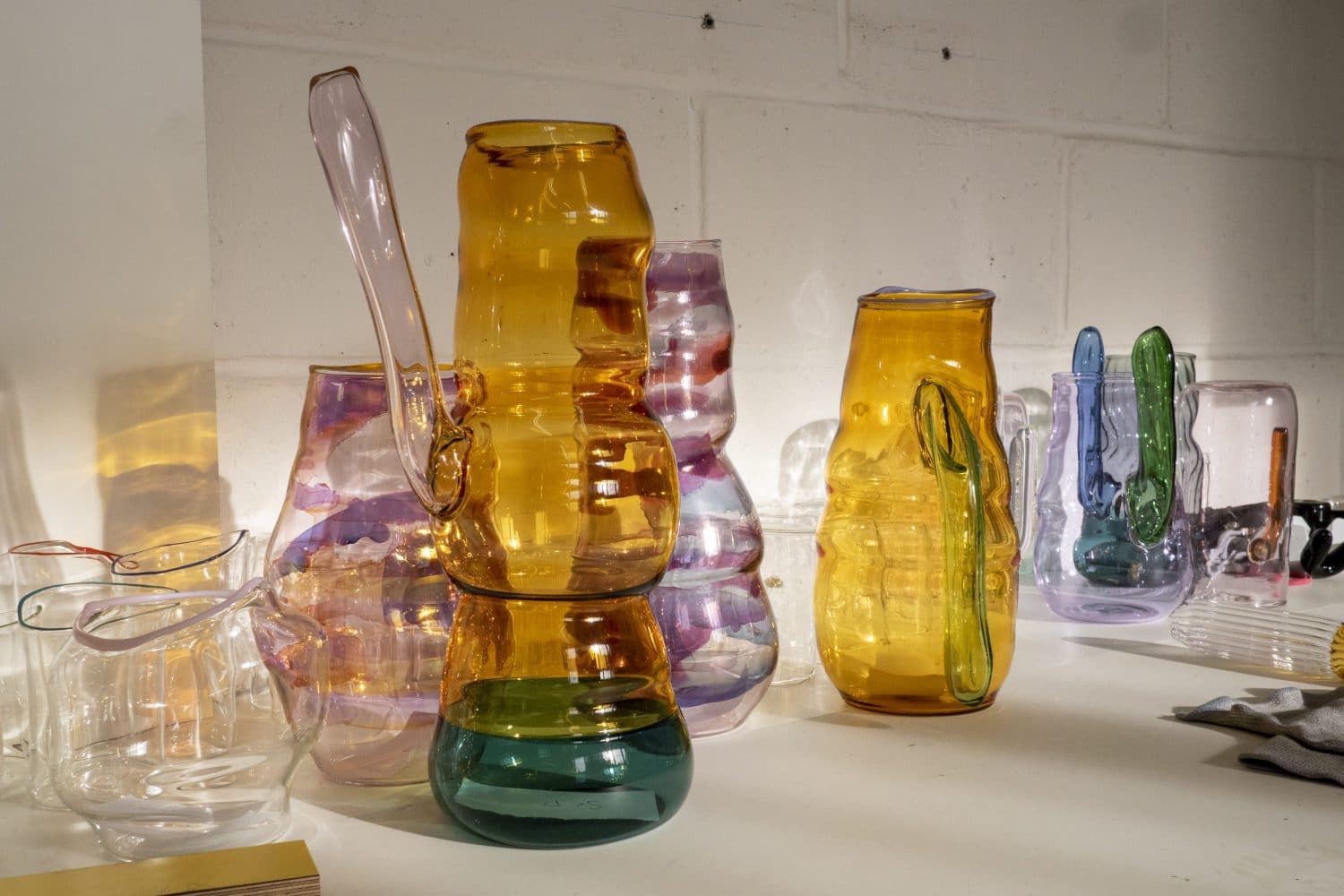 These things are great for young people. Things that fire the imagination in a different way.

It’s not for everybody, a lot of people had problems with it, especially if you are there for the whole time, you feel like you just want to be normal too. But I never had a problem with it, I was glad I could feel better about myself and just get on with things and actually have good marks.

Did you then go straight to art school?

No, I did a Lampworking apprenticeship first, after I had done my civil service. It was at a kind of German version of a polytechnic, where they have three different apprenticeship courses in a kind of high school environment. 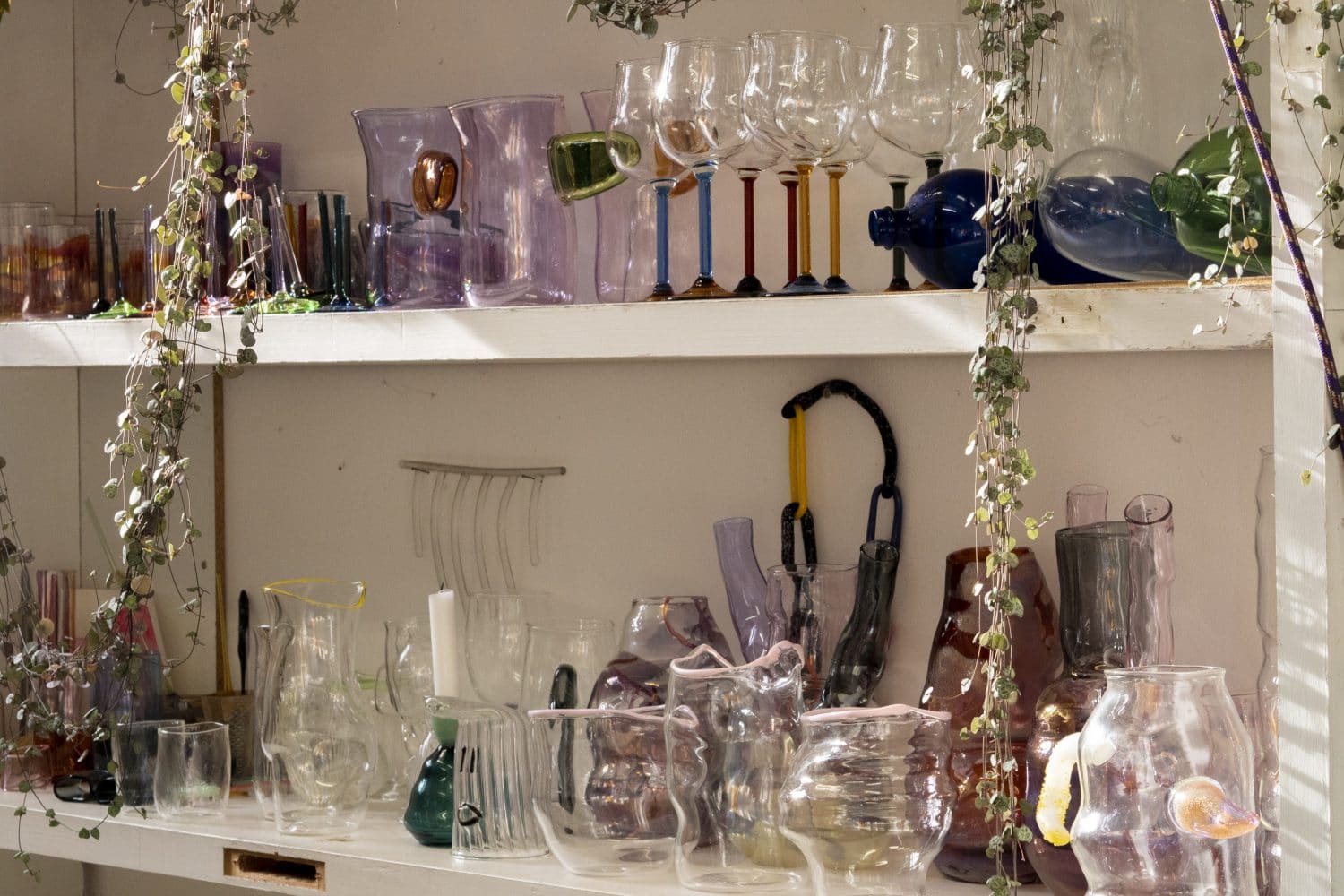 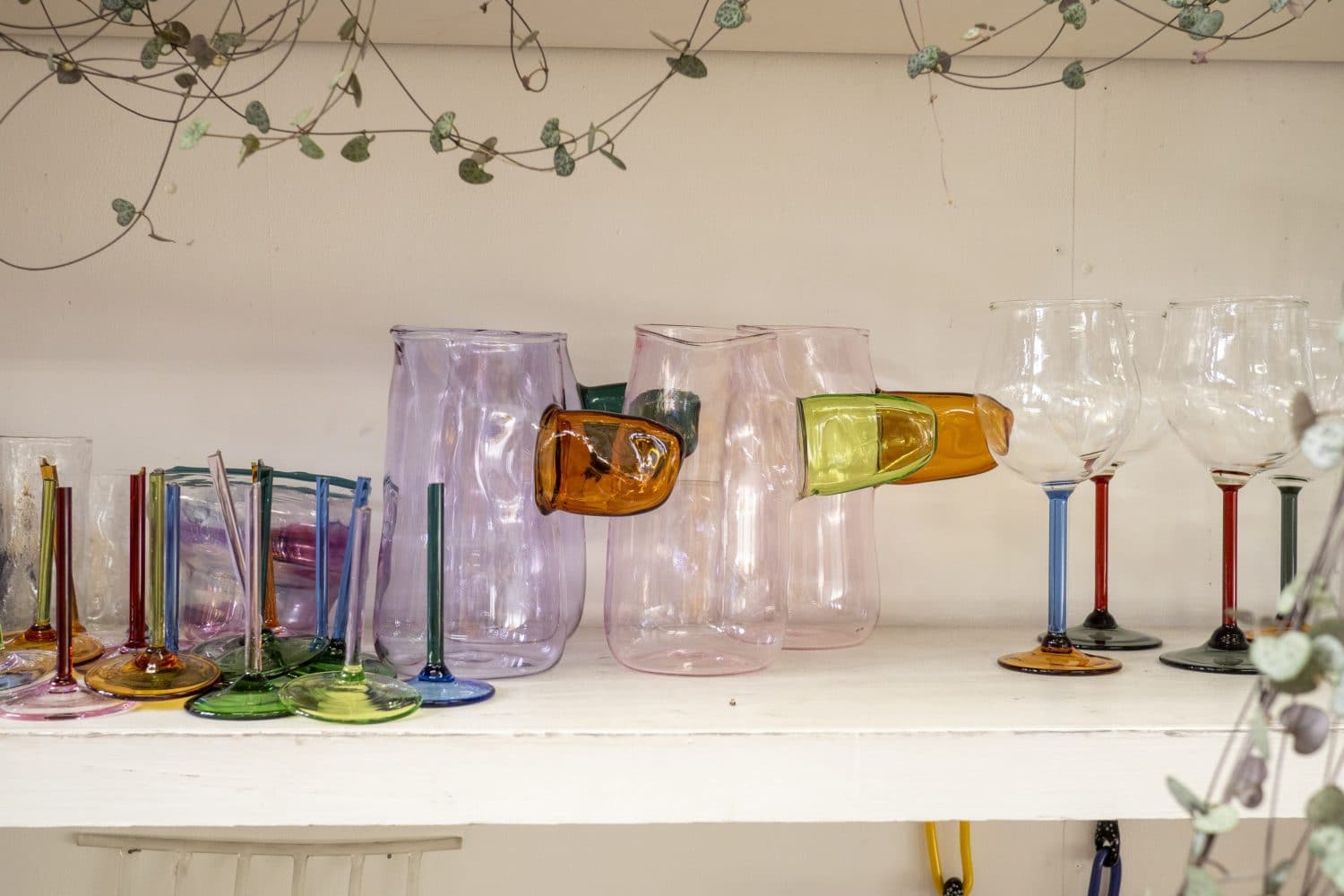 Was there a clear decision that you wanted to work with glass?

No, I had just done all these other things and I thought, why don’t I try glass. I didn’t really know what to do, but got a bit of pressure from my Dad, to just do something. So, I enrolled in this course, which was for scientific lampworking, where you are trained to make laboratory equipment. I did that for three years, working to technical drawings, making one thing to the next, until it looks like it should. By the third year, you make quite complicated things.

Quite rigorous training I imagine, not loose in any way.

No, they hated the art world. They didn’t want anything floppy, they wanted to do real stuff, the proper equipment. 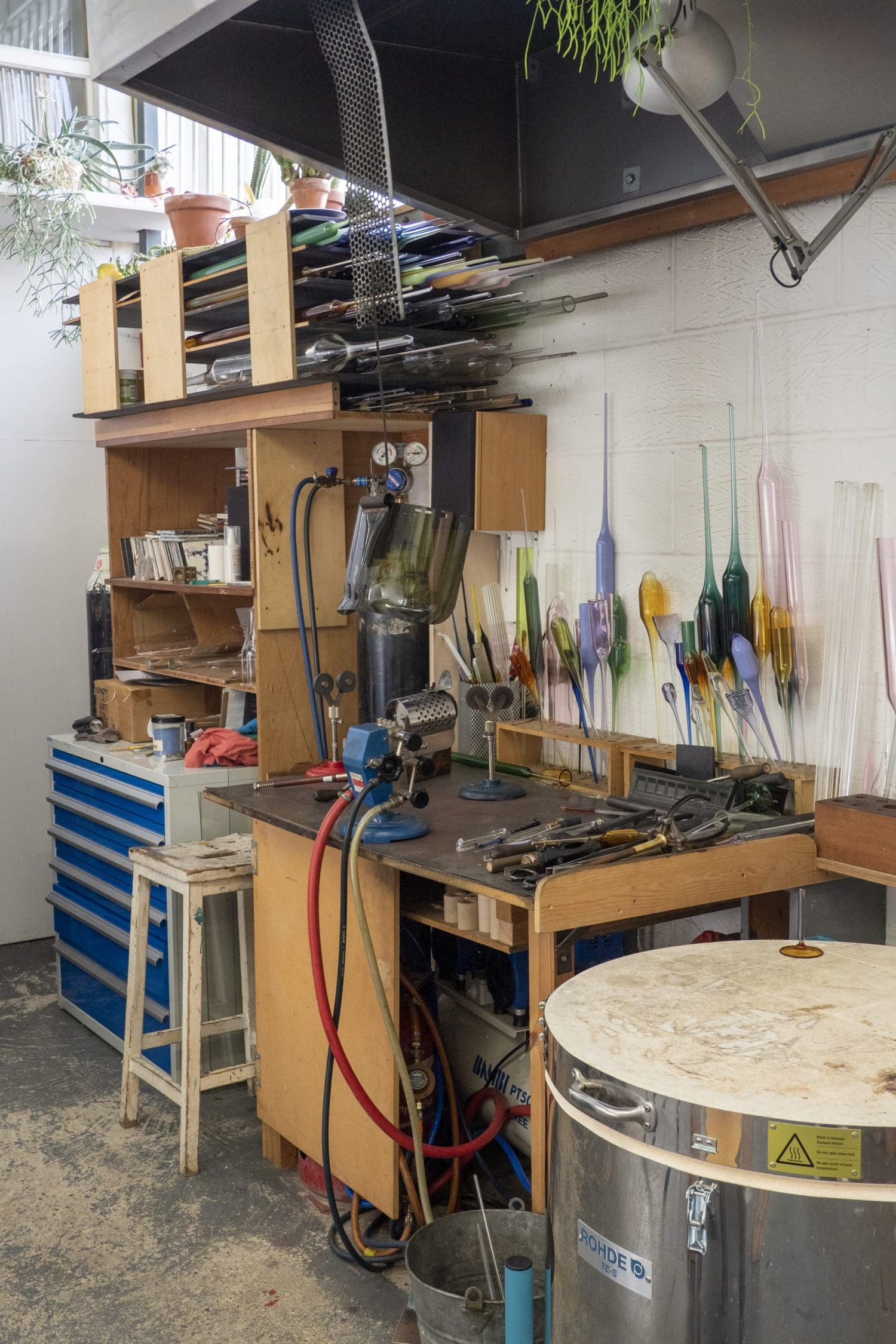 So what did you do next?

I knew that I wasn’t going to do scientific lampworking in some boring company, that much was clear, even though I wasn’t clear about anything else. It was just one way of learning skills. Then another guy who had studied in Farnham, who went to the same school that I did, had a little company in London making giftware and oil lamps and he needed help. So I came to the UK for work, they moved to Edinburgh, so I did too. I also studied at the Edinburgh College of Art and I got to know the glass course at the RCA. I applied when my English was a bit better and they took me. So I came back to London to start the course.

What was the experience like at the RCA and how did that inform your work? Was there a point when your working practice as we know now started to crystallise?

In Edinburgh there was no lampworking, there was furnace glass and all sorts of other techniques. I did a bit of lampworking for the degree show, but not much. I also did a design placement with Dartington Crystal for half a year in between, but this was designing for furnace glass again. I made that decision when I came to the RCA, that I didn’t want to continue with the furnace work. It’s another technique and it’s difficult to learn two things properly, because it takes years to be good at it, and I thought I had the skills in lampworking, so why not make that work. The RCA let me set up my torch there, and I was trying to think what to do with it.  Lampworking is thin and small, my sense was to scale it up to make interesting work, which isn’t informed by technique so much, but more by other considerations. 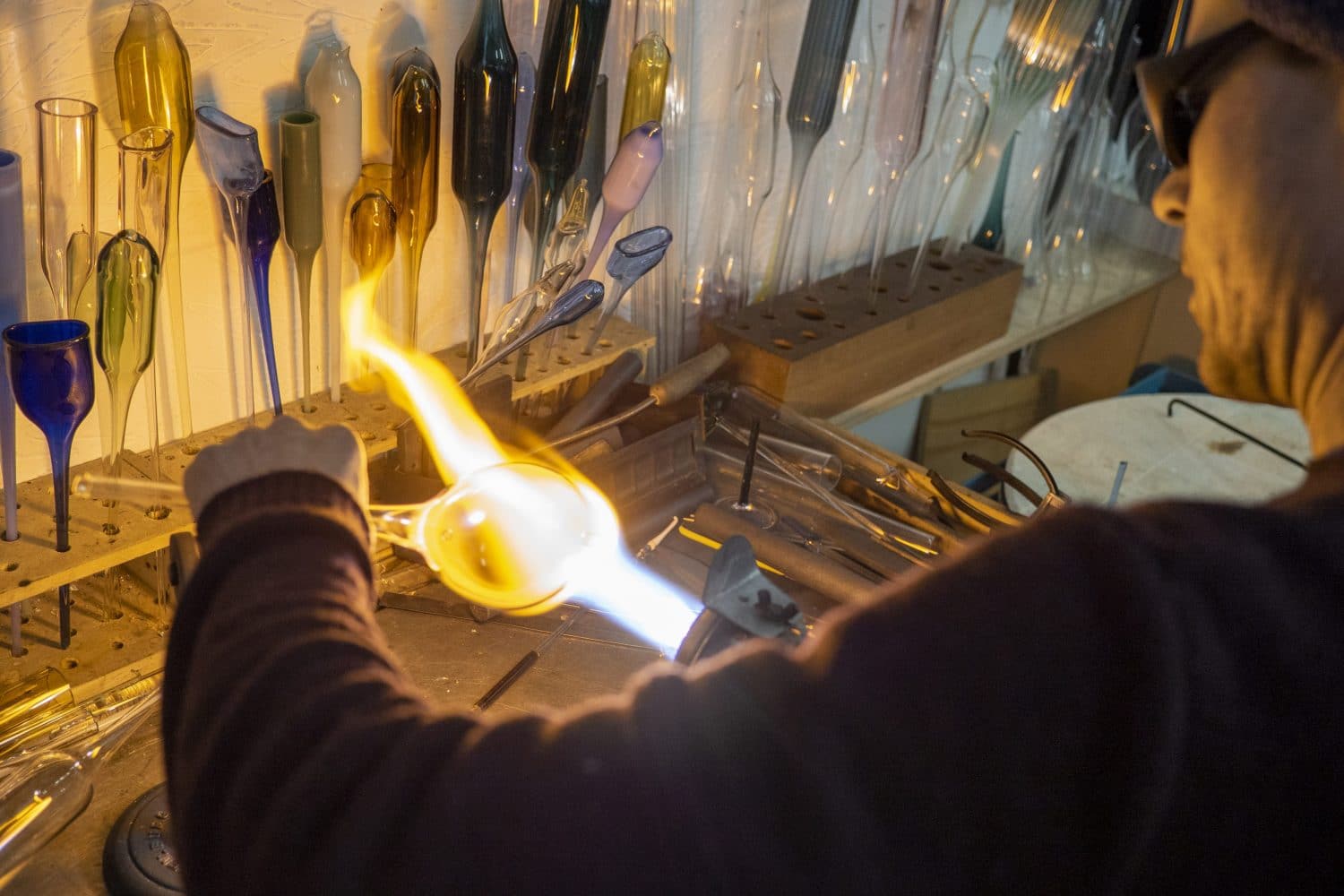 What was the final show like at the RCA?

I made things for an installation piece, I made this chair (which is hanging from the ceiling) and other bigger, more sculptural pieces. At that time there was no coloured tubing, it was only clear glass. I got fed up with just clear glass and I experimented with introducing colour. One technique is to paint inside, but it isn’t proper, it chips and flakes inside. With mirroring (on the chair), this is proper, but it’s also a very strong look and I didn’t want to do that too often.

As you are working in a kind of restricted paradigm, in terms of form and what is possible. How do you approach form?

I can approach it a bit more like a ceramicist, sort of constructing things, taking a little more time in the process. Making decisions myself rather than in normal furnace work, where you work with an assistant and then you need to communicate much more. It’s more difficult to be ad hoc. 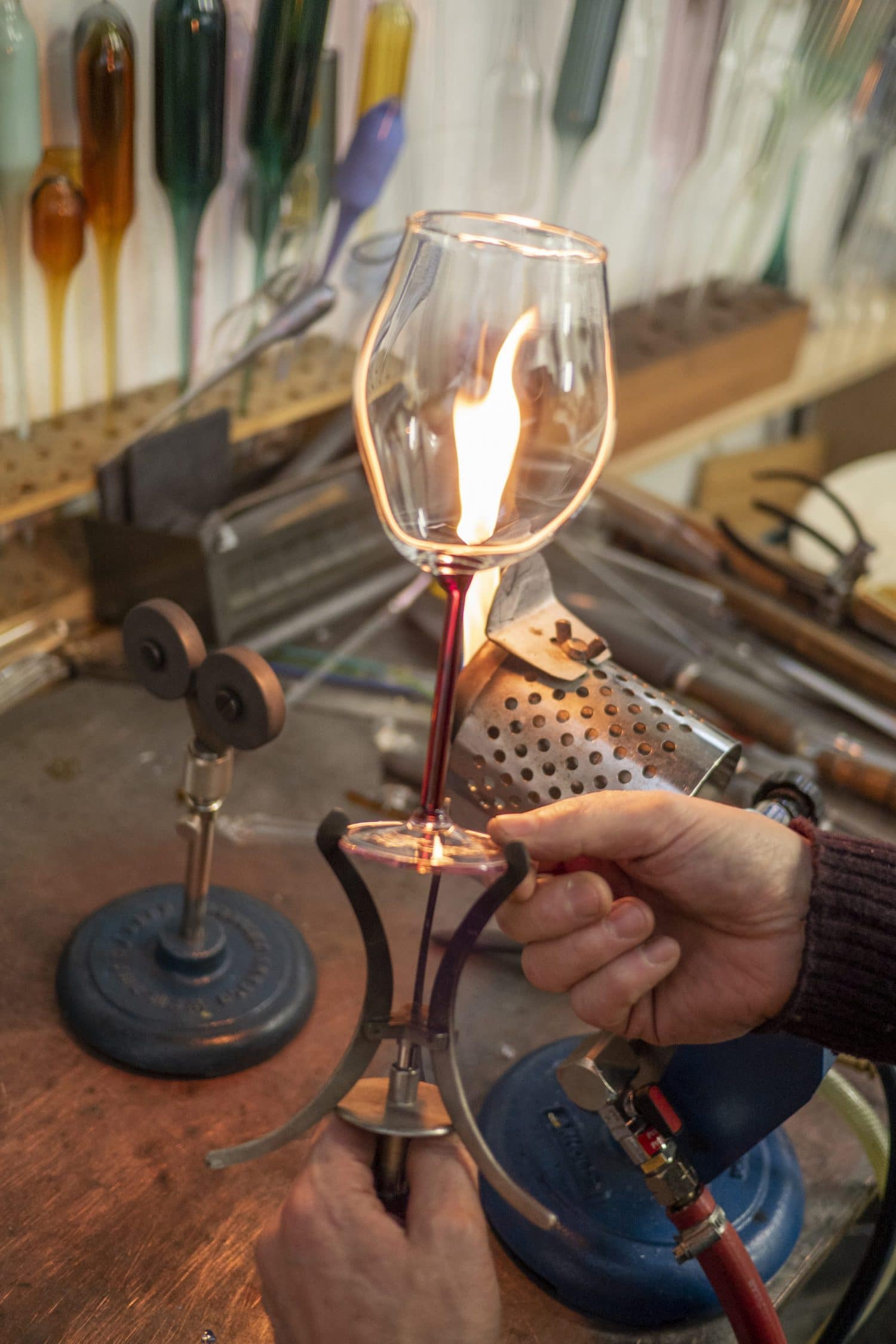 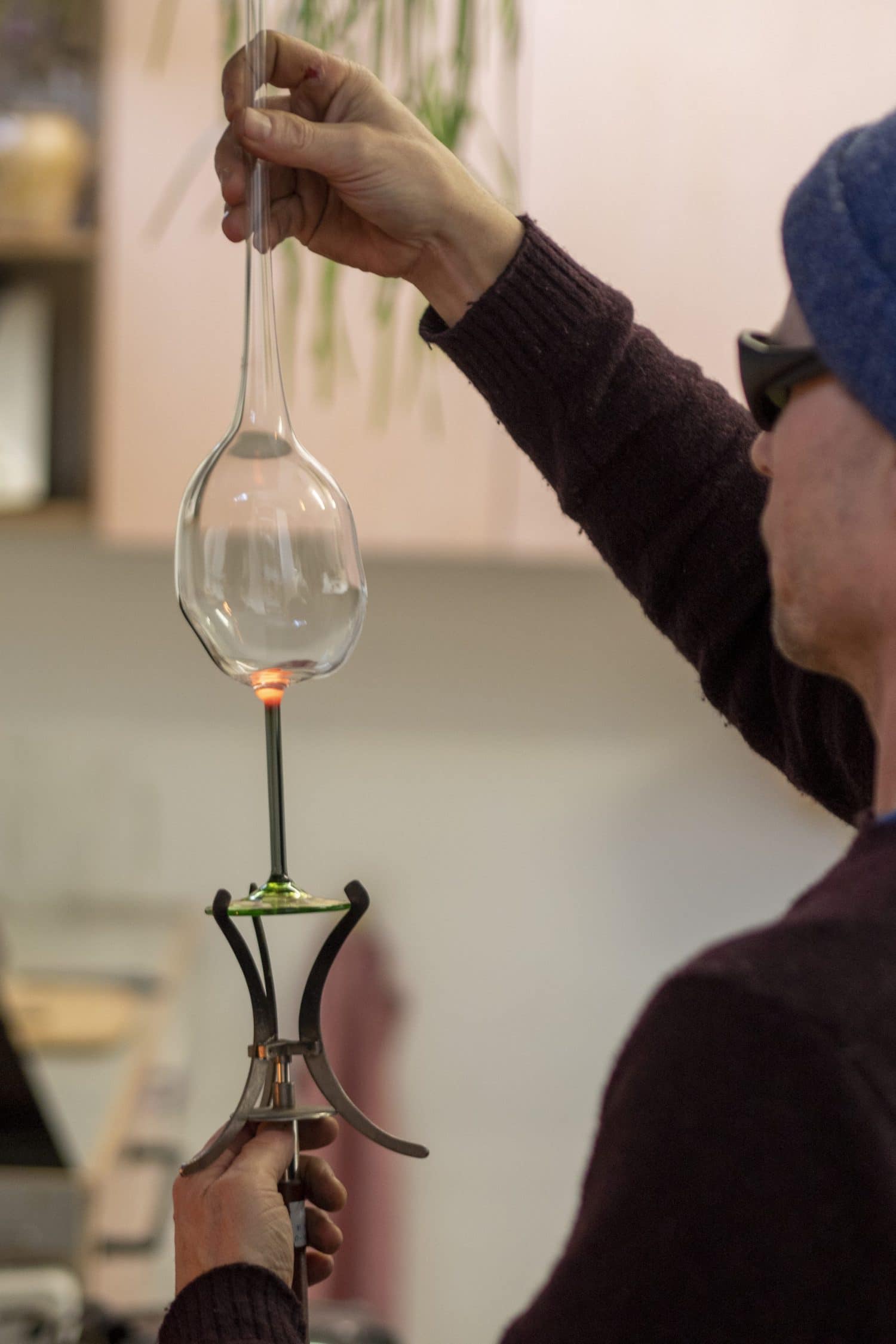 You have talked about the idea of improvisation before and I am interested in this idea.

Improvisation has an energetic quality, it’s not about anything other than its own energy and sensibility, so that is something. This approach of being physical and abstract, it’s a phycological space that you can inhabit. It’s not about anything in particular, it’s just what it is, but done in a way that I think is an interesting gesture.

There are things that I have done many times now. Especially repetitive things, you need to keep it really interesting for yourself, the making process. Otherwise you just become a robot. So everything I make is always slightly different, and I always look at things as I am working. I evaluate every single piece as I go along, because they never come out the same. Then with the new things, they come out of the experience. I might start, and think I’ll combine this and that, but then maybe things suggest themselves in the making. Sometimes something just happens and I think, ah that’s nice, because you can’t imagine it before. I was never good at drawing things and successfully transposing that into an object, because you get the quality you like in a drawing, but then you just get frustrated because you can’t get this whimsical thing going, or the quality you like in the drawing. You need to look for the right quality while you make. 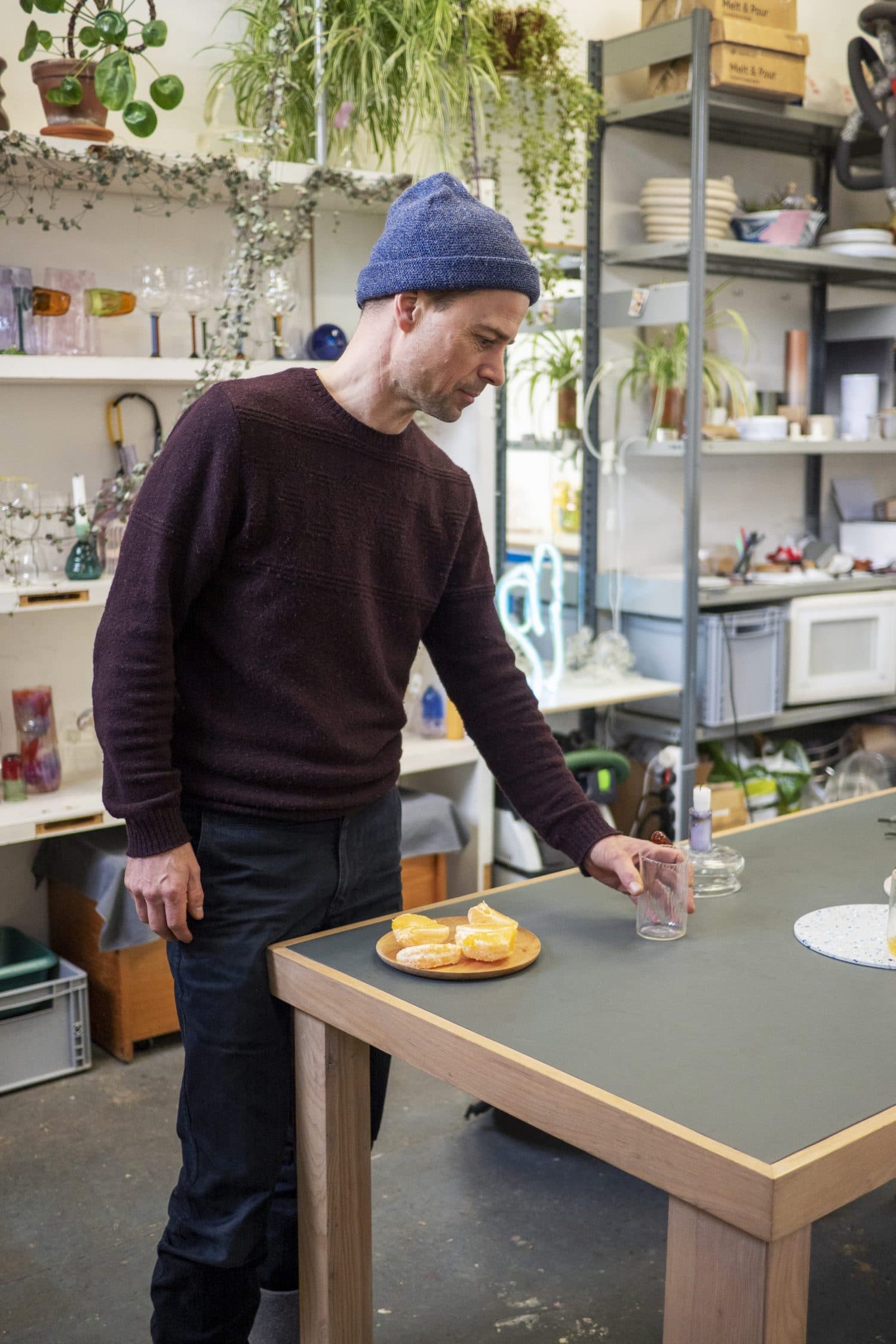 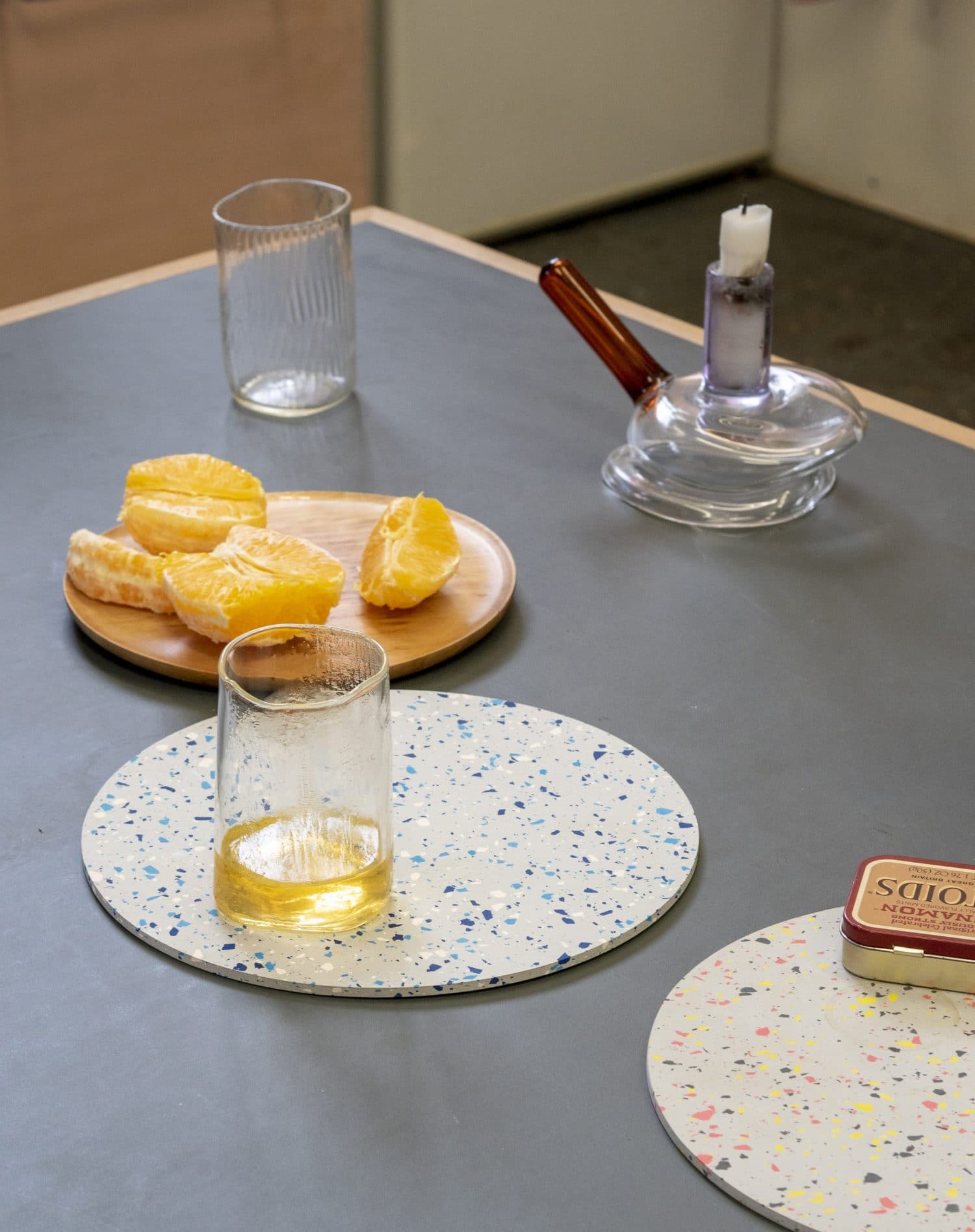 In the morning I don’t start straight away. I’ll have breakfast and then quite often go to yoga. Then I will do emails and stuff. Quite often I won’t start working on the glass until after lunch. I try to do blowing every day, to get between two to four hours in. It would be too much to blow glass for eight hours a day. I do like working in the early evening, often a good time is between 5 and 9pm. It’s hot and sweaty and noisy.

In terms of colour, what is the palette you can choose from? Do you have a set of favourite colours, or combinations?

It is definitely limited. With the tubes they come in about eight or nine transparent colours and another handful of opaque colours. Then you get rods in many more colours, there is a big palette there, which you can use for the lips. Luckily they are all kind of okay, none are really ugly. Except for perhaps the sort of 70s brown colour, which is an odd one. Then another way of colouring pieces is with a lustre, which is applied afterwards. It’s done with a brush and a very thin layer of metal oxide which is fired in. So it’s fired in a metal film. There are quite a few options with this process. I like the variety. 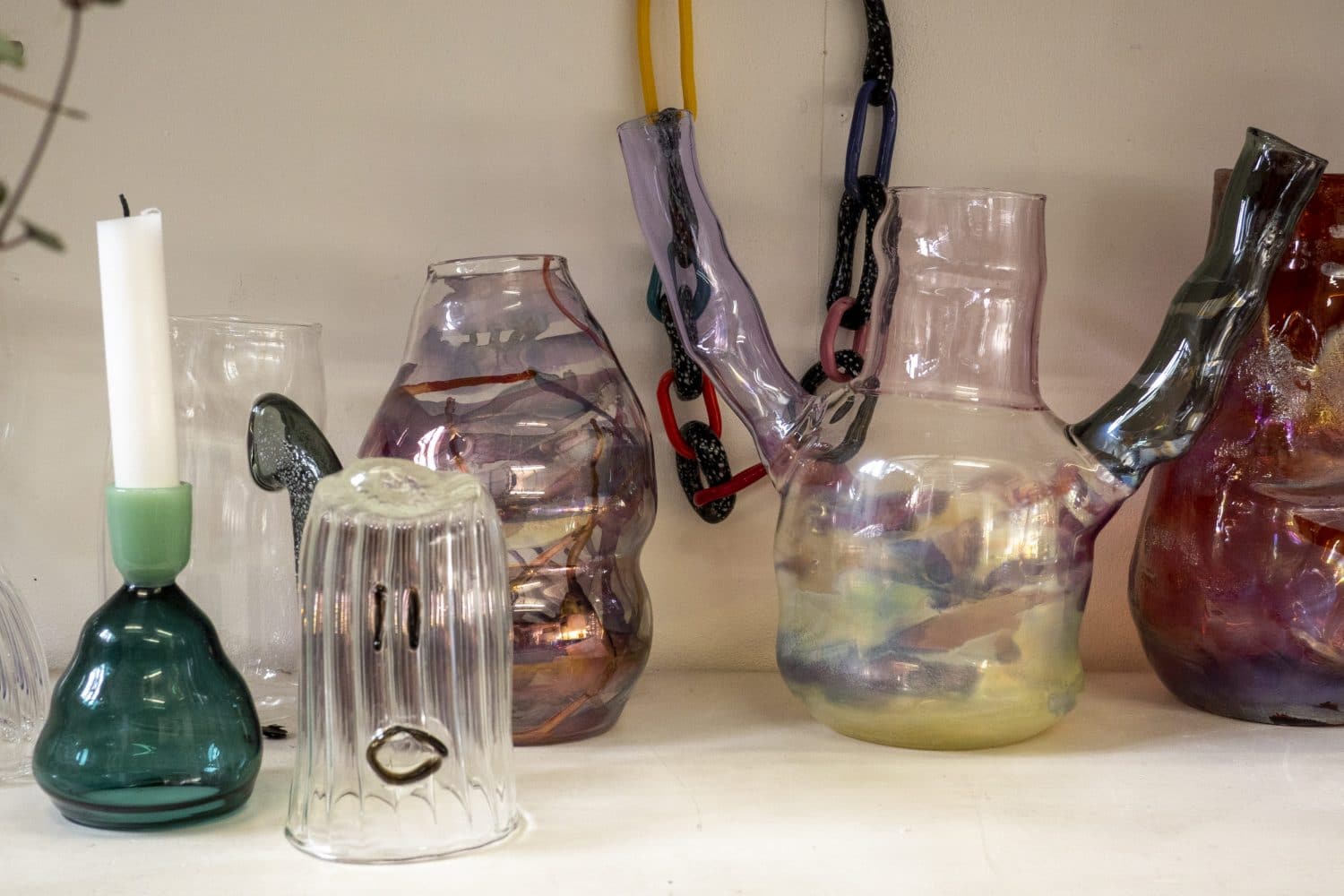 Where are you in your working arc? Are you in an experimental phase or working towards something?

For me exhibitions are always good staging posts. The last one was with Hauser & Wirth in Somerset and I always take them as an opportunity to make new work. That is always a bit nerve-wracking, to see the response, but it always spurs me on. For the Hauser & Wirth show I experimented more with the opaque colours, put opaque colours together on their own, or transparent colours together on their own, neither which I had done before. So, it opens up new areas and then you fill in the gaps. One of the main things is to keep the juices flowing and to keep yourself interested. You have to take risk for that. It’s all part of it. I think there is a risk for makers and craftspeople, to just making things well.

What can we expect over the coming year?

It’s nice to grow slowly into new work. Often there is a sense of asking, can I scale things up? I have done this with things in the past, but found this very nerve-wracking. You need big kilns and transportation is very difficult, but I might just be ready for that at some point soon again. Recently, I re-looked at the glasswork by Ettore Sottsass, there is so much good stuff, he made sort of medium size assemblages with glass, using just pure glass colours. I feel quite inspired by that. 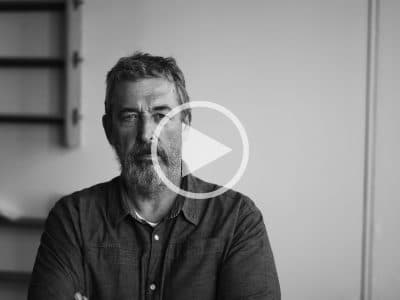 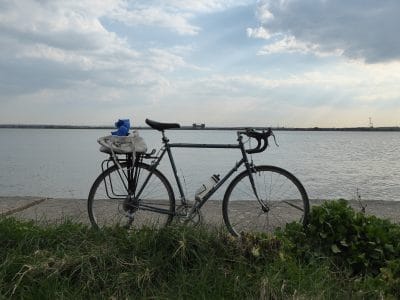 For The Open Road 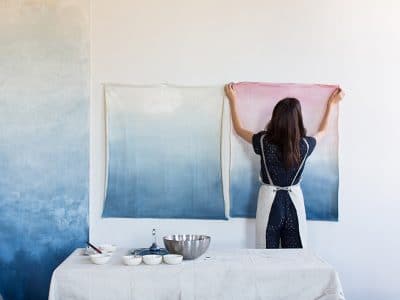